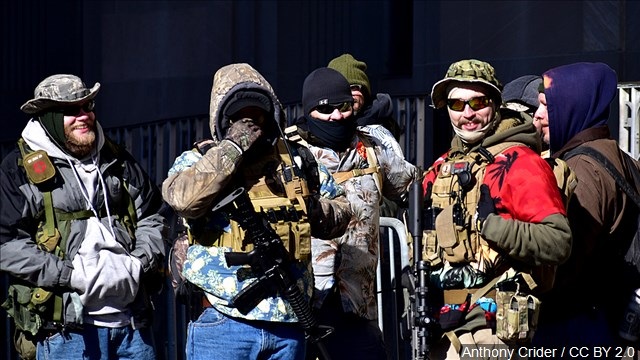 The FBI says 21-year-old Cameron Emerson Casey Rankin  remains in federal custody after agents recovered a black semi-automatic rifle at his residence.   Investigators say Rankin is prohibited from possessing a firearm because he previously was committed to a mental institution.  Rankin allegedly has expressed a desire to overthrow the government, specifically, the “three-letter agencies,” such as ATF, FBI and IRS.

“Firearms in the hands of prohibited persons present a real danger to the law abiding residents of our community. When illegal firearms possession is combined with mental illness and violent, extremist ideologies, we have a prescription for disaster,” stated U.S. Attorney Gregg Sofer. “We will use the full breadth of federal firearms laws to ensure that prohibited persons do not possess or use guns in our neighborhoods.”

The complaint states that Rankin tried to buy two long guns from a San Antonio retail outlet in March of 2018, but was denied the firearms transactions under the “Prohibited Category” for previously being committed to a mental institution.  After being warned by agents with the Bureau of Alcohol, Tobacco, Firearms and Explosives that he was a prohibited person, Rankin posted pictures of himself with a firearm on social media.

Investigators say  Rankin and others carrying long guns and pistols went to a George Floyd protest last May at the Alamo.  The following day, Rankin posted on his Facebook page photos of himself and others carrying firearms at the protest. With the photos, he allegedly posted anti-police comments, including “…hope they burn the precinct down” and “I’m BOOGALOO we hate police.”

The complaint also alleges that in August, Rankin posted a selfie on his Facebook timeline showing him holding a black, semi-automatic rifle in a vertical position against his shoulder with his finger on the trigger.  Rankin posted other photos which included a quote stating,”Diligently Plotting to Take Over the World in order to Leave You Alone.”

Rankin reportedly flew out of San Antonio International on the way to Manchester, New Hampshire with a checked semiautomatic handgun in his luggage.  He missed a connecting flight in Philadelphia, but ATF agents were waiting for Rankin when he got off the plane in Manchester. They served him a written notice that he is prohibited from possessing
firearms and provided him with copies of his mental health records. They also seized the handgun and ammunition from Rankin’s luggage.

“San Antonio FBI’s Joint Terrorism Task Force, and each of the member agencies, are committed to working hard every day to keep our communities safe from violent extremists,” stated FBI Special Agent in Charge Combs. “We encourage members of the public to help us with this important and challenging effort by continuing to report suspicious activity or suspected acts of violence.”

Upon conviction, Rankin faces up to ten years in federal prison. A detention hearing is scheduled Wednesday in San Antonio.

The case falls under the purview of the Attorney General’s Task Force to Combat Violent Anti-Government Extremism. Launched in June, the Task Force is dedicated to supporting the investigation and prosecution
of any person or group who commits violence in the name of an anti-government ideology.

This case is also a part of Project Guardian, which is the Department of Justice’s signature initiative to reduce gun violence and enforce federal firearms laws.