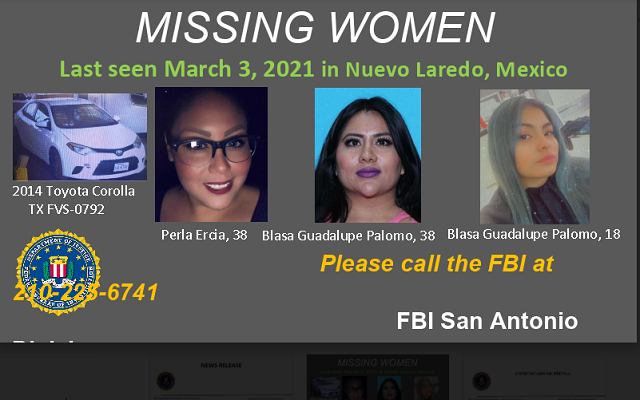 SAN ANTONIO (KTSA News) – The FBI is looking for three women from Laredo, Texas who vanished after traveling to Mexico.  They were last seen March 3 crossing the border into Nuevo Laredo in a white 2014 Toyota Corolla with Texas license plate FVS0792.

The FBI says Lupita takes medication, but did not have them with her. She has black-and-blue ombré hair and brown eyes. She’s 5-foot-3 and weighs about 150 pounds. Lupita was last seen wearing a red sweatshirt.

Her mother, a business owner, has long black hair and brown eyes. She’s  5-foot-3 and weighs 200 pounds. Palomo has a Medusa tattoo on her shoulder and a tattoo of a snake on her forearm. She was last seen wearing a black T-shirt, black pants and black athletic shoes. In addition to Lupita, Palomo has  two younger  children.

Ercia, who went to Nuevo Laredo to see a doctor, has curly dark hair with brown eyes. She’s 5-foot-5 and weighs about 250 pounds. Ercia has an infinity sign tattoo on her left wrist.

Ercia has two elementary-age children and an infant nearly a month old.

Investigators believe the women may have been kidnapped and are still in Mexico. Anyone with information on their whereabouts is urged to contact the FBI’s San Antonio division at 210-225-6741 or online  at tips.fbi.gov.

”This is a particularly heartbreaking case which leaves several children, including an infant just a few-weeks-old, separated from their mother,” said FBI Special Agent Michelle Lee.