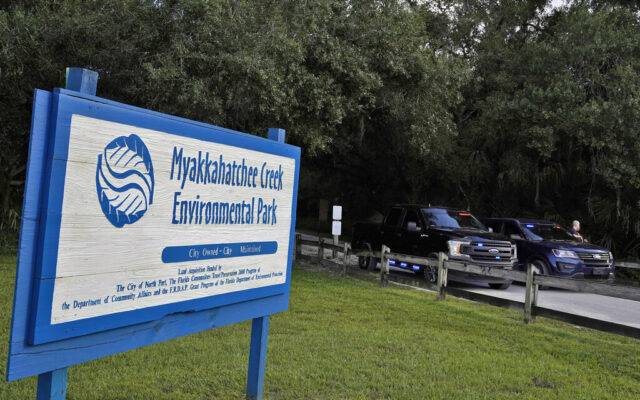 North Port, Fla., police officer block the entrance to the Myakkahatchee Creek Environmental Park Wednesday, Oct. 20, 2021, in North Port, Fla. Items believed to belong to Brian Laundrie and potential human remains were found in a Florida wilderness park during a search for clues in the slaying of Gabby Petito . (AP Photo/Chris O'Meara)

ST. PETERSBURG, Fla. (AP) — Authorities say remains found in a Florida wilderness park are those of Brian Laundrie, who was a person of interest in the death of girlfriend Gabby Petito.

Petito was found slain at a Wyoming national park months while the pair was on a cross-country van trip chronicled on social media.

The FBI’s Denver office said in a news release that a comparison of dental records confirmed that the remains were Laundrie.

The remains were discovered Wednesday in a swampy nature preserve near North Port, Florida, after a massive search.

That search began shortly after Laundrie disappeared Sept. 14, two weeks after the 23-year-old returned alone to his parents’ home in Florida.