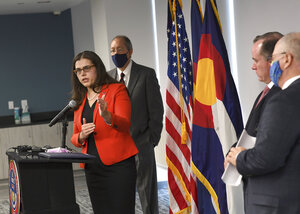 DENVER (AP) — The FBI said Wednesday that its agents are joining a criminal investigation into an alleged security breach of a rural Colorado county’s voting equipment.

The agents are working with Mesa County prosecutors to determine if there was a criminal violation, FBI spokeswoman Courtney Bernal said in a statement.

The federal probe comes after Colorado’s Secretary of State Jena Griswold alerted federal cyber security officials within the U.S. Department of Homeland Security of the suspected breach. The federal officials confirmed the alleged breach would not pose significant election risks “at this point,” Griswold said earlier this week.

Griswold last week accused Mesa County Clerk and Recorder Tina Peters of directing staff to turn off video surveillance of its voting equipment before a May 25 software update and allowing a non-employee into the elections office at that time.

Griswold’s office identified the man, but refused to say anything more about who he is or why he was there. The Associated Press isn’t naming him until more information becomes available about him. He has not been charged with a crime.

Peters spoke about Griswold’s inquiry into the alleged security breach at an event last week in South Dakota hosted by My Pillow chief executive Mike Lindell who has become well-known for his unwavering support of Trump and efforts to overturn the 2020 election because of widespread fraud. A range of election officials across the country including Trump’s former attorney general, William Barr, have confirmed that widespread fraud did not take place.

Peters said that Griswold’s investigation is an attempt at a takeover of Mesa County’s elections in one of Colorado’s last Republican strongholds.

Griswold on Monday said in a statement that two hard drive images from Mesa County election servers were obtained by election conspiracy theorists.

Her office said they believe one of the hard drive images was taken on May 23 from a secure room where the election equipment was stored and accessed by Peters, the non-employee and another county elections employee.

Colorado’s voting system has been praised by officials, including former Trump-appointed Homeland Security Secretary Kristjen Nielsen, as one of the safest in the nation.

The state’s election procedures were developed under both Republican and Democrat-appointed Secretary of States.

Nieberg is a corps member for the Associated Press/Report for America Statehouse News Initiative. Report for America is a nonprofit national service program that places journalists in local newsrooms to report on undercovered issues.