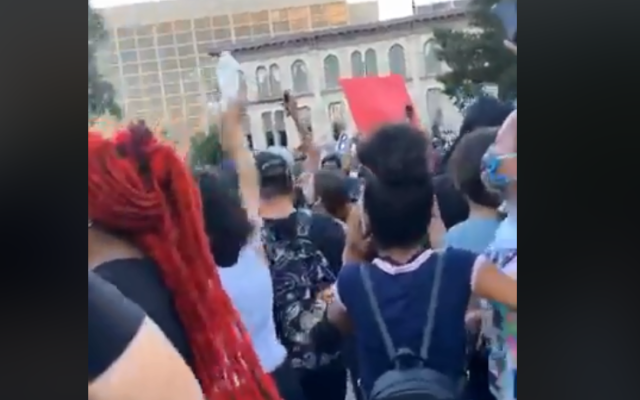 George Floyd Protest at the Alamo May 30, 2020/KTSA Photo-Elizabeth Ruiz

SAN ANTONIO (KTSA News) –  The FBI wants to see your photos and videos of the violence that erupted in downtown San Antonio Saturday night following the rally demanding justice for George Floyd.   A Minneapolis police officer has been charged with Floyd’s murder, triggering demonstrations, some of them violent, in San Antonio and across the country.

Thirty-nine downtown businesses and 28 city sites were damaged Saturday night.  Three men from San Antonio and one from Uvalde were arrested and charged with rioting, but the investigation continues.

“We’re really focused on apprehending and charging violent instigators,” said FBI Special Agent Michelle Lee. “These are the individuals that are exploiting legitimate, peaceful protests that are protected by the First Amendment.”

She says the  FBI respects the rights of individuals to peacefully exercise their First Amendment rights.

“Our mission of protecting the American people and upholding the Constitution is dual and simultaneous, not contradictory,” said Lee.

The FBI is looking at criminal activity such as destruction of property and engaging in violations of federal law, so they’re asking you to submit information, photos , videos and digital media related to the case at fbi.gov/violence.

“The continued violence, potential threat to life, and destruction of property across the United States interferes with the rights and safety of First Amendment-protected peaceful demonstrators, as well as all other citizens,” said Lee.