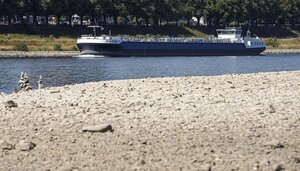 The river Rhine is pictured with low water in Cologne, Germany, Wednesday, Aug. 10, 2022. The low water levels are threatening Germany's industry as more and more ships are unable to traverse the key waterway. Severe drought will worsen in Europe in August as a hot and dry summer persists. (AP Photo/Martin Meissner)

COLOGNE, Germany (AP) — Officials in Germany said Wednesday that water levels on the Rhine could reach a critically low point in coming days, making the transport of goods along the river — including coal and gasoline — increasingly difficult.

Weeks of dry weather have turned several of Europe’s major waterways into trickles, posing a headache for German factories and power plants that rely on deliveries by ship.

“This is particularly the case for the Rhine, whose nautical bottleneck at Kaub has very low water levels but which remains navigable for ships with small drafts,” said Tim Alexandrin, a spokesman for Germany’s Transport Ministry.

Authorities predict that water levels at Kaub will dip below the mark of 40 centimeters (16 inches) early Friday and keep falling over the weekend. While this is still higher than the record low of 27 cm seen in October 2018, many large ships could struggle to safely pass the river at that spot, located roughly mid-way along the Rhine between Koblenz and Mainz.

“The situation is quite dramatic, but not as dramatic yet as in 2018,” said Christian Lorenz, a spokesman for the German logistics company HGK.

Due to the lack of water ships bringing salt down the river from Heilbronn to Cologne that would normally carry 2,200 metric tons (2,425 U.S. tons) of cargo are currently only able to transport about 600 tons, he said.

“Of course we hope that shipping won’t be halted, but we saw in 2018 that when water levels got very low the gas stations suddenly had no more fuel because ships couldn’t get through,” said Lorenz.

Authorities are taking steps to shift more goods traffic onto the rail network and, if necessary, give it priority, said Alexandrin, the Transport Ministry spokesman.

Meanwhile HGK and other shipping companies are preparing for a ‘new normal’ in which low levels such as those seen this year become more common as global warming makes droughts more severe, sapping water along the length of the Rhine from the Swiss Alps to the North Sea.

“There’s no denying climate change and the industry is adjusting to it,” said Lorenz.

All new ships being ordered by the company will be built with a view to making them suitable for low water levels on the Rhine, he said.