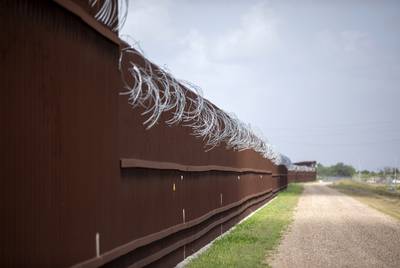 A segment of the border fence in Donna, Texas on June 27, 2019. Miguel Gutierrez Jr./The Texas Tribune

U.S. Customs and Border Protection announced on Monday that three contracts have been awarded to begin construction of 65 miles of new border fence in the Rio Grande Valley.

Construction is set to begin in early 2020 “pending availability of real estate,” according to a CBP press release. It’s not clear whether the agency has control of the land where it plans to build the barrier and the release doesn’t specify exactly where it will be built in Cameron, Hidalgo and Starr counties.

The agency said the contracts with Southern Border Constructors and Gibraltar-Caddell Joint Venture have a base cost of $385.7 million, but the total cost of the projects could go as high as $800 million including “options.” The agency’s statement doesn’t explain that term and an agency spokesperson could not be reached for comment.

That means the price tag per mile of fence will be between $5.9 million and $12.5 million.

The agency said the new fencing will be non-continuous segments that will range from 18 to 30 feet tall. The construction will include “all-weather roads, lighting, enforcement cameras, and other related technology to create a complete enforcement zone,” according to the press release.

The federal government built 654 miles of fencing in the Rio Grande Valley starting in 2006 and obtained most of the land from private landowners through eminent domain. The Texas Tribune and ProPublica reported in 2017 that the federal Department of Homeland Security circumvented laws designed to help landowners receive fair compensation, failed to conduct formal appraisals of land it targeted for fence construction and issued low-ball offers based on substandard estimates of property values.

CBP didn’t specify the funding source for the new barrier construction, but it said the money for the new contracts isn’t coming from the national emergency declaration that President Donald Trump announced in February to allocate additional money for the border wall, which Democrats protested as unconstitutional. It also won’t be financed by the $3.6 billion that Defense Secretary Mark T. Esper agreed to allocate from the Pentagon’s budget for the border wall earlier this month.

Shooting victim dropped off at a San Antonio fire station

Texas senator wants to outlaw display of firearms at demonstrations