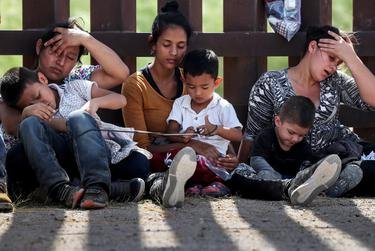 Immigrant women hold their children along the border wall as they await apprehension after illegally crossing into the U.S. from Mexico on August 29, 2018. Credit: REUTERS/Adrees Latif

The ruling by Judge Drew Tipton comes after he had already temporarily paused the moratorium twice. The ban is nationwide and is in place as the case continues to play out in courts.

The ruling is a victory for Texas Attorney General Ken Paxton, who sued to block Biden’s order three days into the Biden administration. Paxton’s office argued the state would face financial harm if undocumented immigrants were released into the state because of costs associated with health care and education, and said the moratorium would also lure others to come to Texas.

Tipton, a Trump appointee to the federal bench, wrote in his order that Texas would also incur costs for detaining immigrants within its state. “Texas claimed injury from unanticipated detention costs is sufficiently concrete and imminent. The harm is concrete or de facto because Texas incurs real financial costs in detaining criminal aliens,” he wrote.

It’s unclear whether the Biden administration will appeal the ruling to the 5th Circuit Court of Appeals, which has jurisdiction over Texas’ federal benches.

Biden’s moratorium was announced as part a review of enforcement policies within Customs and Border Protection, Immigration and Customs Enforcement, and the U.S. Citizenship and Immigration Services agencies as the administration developed its final priorities, according to the Biden administration. Tipton’s order does not affect the rest of that review.

The American Civil Liberties Union, which intervened in the case, said the ruling only means an extension of former President Trump’s hardline policies.

“Allowing these deportations to continue means that families will be torn apart and that people who have the opportunity to seek relief in the United States will be returned to danger,” Kate Huddleston, attorney with the ACLU of Texas, said in a statement. “At the same time that Texans face a long recovery from a deadly winter storm, Paxton is inflicting yet another trauma on our communities by creating fear and uncertainty.”

Days after Tipton issued the first order, a witness to the El Paso Walmart shooting was deported after being pulled over during a traffic stop. Her attorney said the woman, who was cooperating with prosecutors in El Paso, would not have been sent back to Mexico had Paxton not filed the lawsuit.