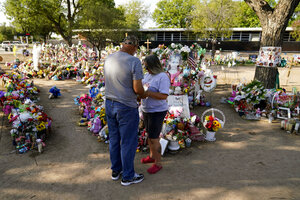 Pastor Wayne Traverse, from Port St.Lucie, Fla., left, prays with a woman at a make-shift memorial honoring the school shooting victims at Robb Elementary, Tuesday, July 12, 2022, in Uvalde, Texas. Students who survived the May 24 shooting at an elementary school in Uvalde, Texas are spending the summer grappling with post-traumatic stress disorder. Meanwhile, parents find themselves unable to help them, worried the tragedy at Robb Elementary struck a largely Hispanic town as Latinos continue to face disparities to access mental health care. (AP Photo/Eric Gay)

A federal lawsuit has been filed in Del Rio, Texas, against eight entities and three individuals for the May shooting that killed 19 students and two teachers at Robb Elementary School in Uvalde.

The lawsuit, first reported by the San Antonio Express-News, was filed Wednesday by one parent whose child was wounded in the shooting and two parents whose children were on campus at the time. Attorneys for the parents say it is the first federal lawsuit related to the attack.

“The horrors of May 24, 2022 were only possible because so many in positions of power were negligent, careless, and reckless,” according to a statement from Stephanie B. Sherman, one of two attorneys representing the parents.

“We are already hearing that many (students) are scared for their lives,” said Monique Alarcon, the other attorney for the parents. “This case is about ensuring that they have access to the care and resources they need.”

The police response to the shooting was sharply criticized as nearly 400 officers responded, but waited more than an hour before confronting and killing the gunman,

School Principal Mandy Gutierrez, who was reinstated three days after being suspended when she rebutted a sharply critical legislative committee report alleging a “culture of complacency” at the school, is also named in the lawsuit.

The lawsuit alleges Motorola’s products failed to operate inside the school, “leaving first responders without information communicated from dispatch and/or other first responders,” and that “Schneider Electric’s doors failed to lock as designed after being shut.”

The defendants declined comment or did not return messages to The Associated Press on Thursday.

The lawsuit seeks unspecified punitive damages from each defendant but the school district and the city, which are exempted by state law from such awards.