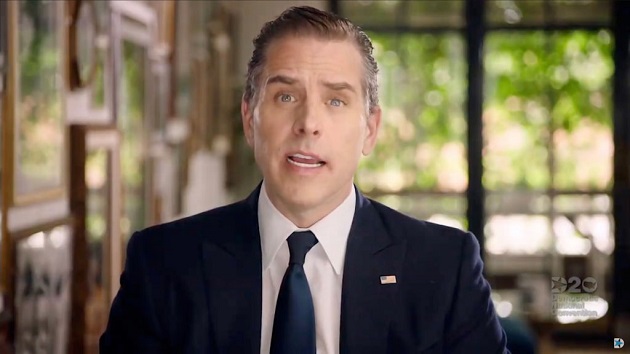 MILWAUKEE, WI - AUGUST 20: In this screenshot from the DNCC’s livestream of the 2020 Democratic National Convention, Hunter Biden, son of Democratic presidential nominee Joe Biden, addresses the virtual convention on August 20, 2020. The convention, which was once expected to draw 50,000 people to Milwaukee, Wisconsin, is now taking place virtually due to the coronavirus pandemic. (Photo by DNCC via Getty Images) (Photo by Handout/DNCC via Getty Images)

An increasing number of witnesses have appeared before a grand jury impaneled in Wilmington, Delaware, in recent months, the sources said, and have been asked about payments Hunter Biden received while serving on the board of directors of Ukrainian natural gas company Burisma, in addition to other questions about how Biden paid off tax obligations in recent years.

The U.S. Attorney’s Office for Delaware, which has been leading the investigation, is expected to hear from more witnesses in the coming weeks, sources told ABC News.

Sources say that prosecutors have not made a decision yet on whether criminal charges against Biden are warranted, and that there is debate about whether Biden’s admitted past drug abuse could serve to undermine a criminal case over his financial decision-making.

Chris Clark, an attorney for Hunter Biden, did not respond to a request for comment. The developments in the probe were first reported by The New York Times.

Hunter Biden confirmed the existence of the investigation in December 2020, shortly after his father won the presidency. Since taking office, President Biden has repeatedly pledged to uphold the independence of the Justice Department and not interfere in its work. The tax probe is being led by U.S. Attorney Dan Weiss, a Trump appointee who remained on the job after Biden was sworn in.

In a statement released through the Biden-Harris transition team in December 2020, Hunter Biden said that he and his attorney had learned of the investigation just days earlier, and that he was confident that he had handled his tax affairs “legally and appropriately.”

ABC News has previously reported that the investigation began in 2018 — more than a year before Biden announced his presidential run. Investigators paused their work ahead of the election and waited until after votes were cast to notify Hunter Biden’s legal team of the probe, a source told ABC News at the time.

Ahead of the 2020 election, political foes of then-candidate Joe Biden — including then-President Donald Trump — focused on Hunter Biden’s work as a board member for Burisma as well as a series of ill-fated investment endeavors in China. Trump and his allies sought unsuccessfully to characterize Hunter Biden’s foreign business dealings over the past decade as evidence of Biden family corruption.

Sources told ABC News that prosecutors in Delaware are investigating the tax implications of Hunter Biden’s work in both China and Ukraine, among other business endeavors.