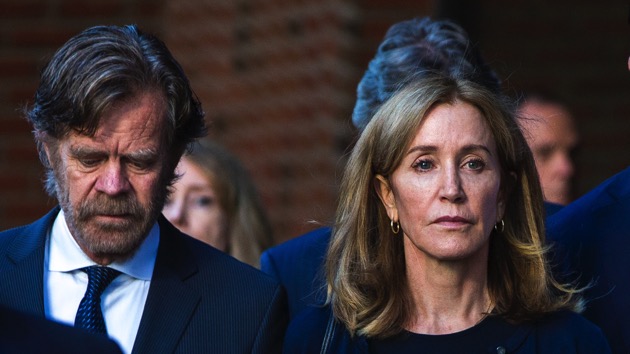 BOSTON, MA - SEPTEMBER 13: Felicity Huffman, right, and her husband, William H. Macy, walk out of John Joseph Moakley United States Courthouse in Boston, MA on Sept. 13, 2019. Huffman was sentenced to 14 days in prison and community service for her role in the college admissions scandal. (Photo by Nic Antaya for The Boston Globe via Getty Images)

A rep for the Desperate Housewives alum confirmed to Good Morning America she wrapped up her year of supervised release on Sunday, fulfilling the last stipulation of her sentence after pleading guilty of arranging for her daughter’s SAT score to be manipulated.

Prior to entering the final phase of her punishment, Huffman was sentenced to 14 days in prison, as well as ordered to pay a $30,000 fine and serve 250 hours of community service.

The Oscar-nominated actress is expected to have her passport returned to her in the coming days, having relinquished it to the probation department at the start of her sentence.

Huffman, 57, and more than 30 other wealthy parents were caught in the largest college cheating scam ever prosecuted by the U.S. Department of Justice, which was dubbed “Operation Varsity Blues.”

The American Crime alum was accused of making payments to William “Rick” Singer, a college-entrance tutor guru whom prosecutors identified as the ringleader of the nationwide scam, to help her daughter, Sophia, cheat on the SAT.

Huffman pleaded guilty and admitted she paid Singer $15,000 to falsify her daughter’s score by arranging for a college-entrance exam proctor to correct the answers. The payment also arranged for Sophia to have more time to take the test.

With Huffman finishing her sentence, another high-profile name involved in the scandal, fellow actress Lori Loughlin, is due to report to prison on Nov. 19. The Full House alum has been sentenced to serve a two-month jail sentence, pay a $150,000 fine and complete 150 hours of community service.