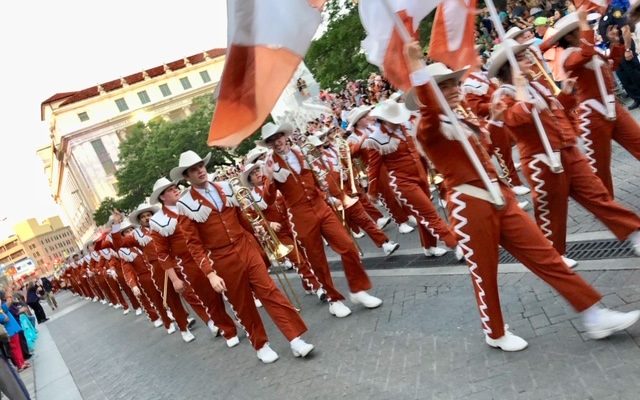 SAN ANTONIO (KTSA News) – Fiesta San Antonio has been postponed until June because of the pandemic, but two major parades have been canceled.

The Battle of Flowers Parade, which began in 1891 to commemorate the 1836 Battle of San Jacinto, has been canceled this year instead of  moving to the summer.  The Fiesta Flambeau Parade, which would have illuminated the streets of San Antonio for the 73rd year, also has been called off.

” Because of the ongoing pandemic, and the extraordinary safety precautions in planning these events, the Battle of Flowers® Association and the Fiesta Flambeau® Parade Association were forced to cancel their respective parades in 2020,” the organizations said in a joint statement. “Part of safe planning is re-evaluating whether or not to hold both parades that draw well over one million spectators to the streets of San Antonio for the traditional day and night parades during Fiesta® week.”

Robert Cuellar, President of the Fiesta Flambeau Parade Association, said the health and safety of the spectators, the participants and the volunteers who work on the illuminated  night parade was their major concern.  The organization has recently lost three members to COVID-19.  Alice and Larry Pena, who were married for 60 years, died within two days of each other.  Alfred Cortinas also succumbed to the virus.  Cuellar said other members of the organization have battled COVID-19 or have lossed loved ones to the virus.

“We figured the best decision to make was to cancel the parade this year and look forward to 2022,” Cuellar told KTSA News.

Another reason for cancelling the Fiesta Flambeau this year instead of postponing it until June is the difficulty of getting high school bands to participate while schools are not in session.  That sentiment was echoed by the Battle of Flowers Association president. .

“We look forward to coming back in 2022, stronger than ever as we are the founding event of Fiesta!”

The theme will be “Viva Las Flores.”

Fiesta San Antonio,  which includes more than 100 events sponsored by nonprofit organizations, was scrapped last year because of COVID-19.  This year’s 11-day event was scheduled to take place in April, but Fiesta San Antonio Commission President Walter Serna says they were concerned about the coronavirus numbers–the positivity rate, the hospitalizations,  and the slow rollout of the vaccine.

“After tracking the science for the last 3 or 4 months now, we’ve decided to postpone Fiesta until June 17-27,” said Serna.

He told KTSA News they made the decision to postpone Fiesta after several meetings with their consultant, Dr. Martin Makary, the City of San Antonio and Metro Health.

“We all felt it was best to move it to June because it’s got to be safety first,” Serna explained. “We need to have in mind the safety of our attendees, our volunteers and our sponsors.”

Under normal circumstances,  Serna says Fiesta San Antonio pours about $400 million into city coffers with more than 100 events sponsored by local nonprofit organizations.  They chose to postpone Fiesta rather than cancel it altogether.

“These nonprofits are suffering right now.  They’re trying to survive.  They do so much for the community and they’ve been hard hit with no Fiesta last year,” said Serna.

The Fiesta Oyster Bake announced last week that this year’s event is canceled.  The two largest Fiesta parades have been canceled, but Serna says the Texas Cavaliers have agreed to hold the Fiesta River Parade in June.

“Delaying Fiesta 2021 until June puts safety first, and it is
the right move for our community,” said Mayor Ron Nirenberg. “Through the ongoing vaccination program and our continuing efforts to suppress COVID-19, we are working to be in a better position by June.”

You may request a refund of the ticket price to the Battle of Flowers® Parade here beginning February 15, 2021. Click on ticket information and follow instructions.

You may request a refund of the ticket price to the Fiesta
Flambeau® Parade here  beginning February 15, 2021. Click on ticket information.

You have the option to convert your ticket into a tax-deductible
donation to the Battle of Flowers® Association or the Fiesta
Flambeau® Parade Association, Inc. by choosing that option on
their respective websites.  March 15, 2021 is the deadline to choose one of these options

“Stay safe and we will see you in 2022!” said the parade organizers.