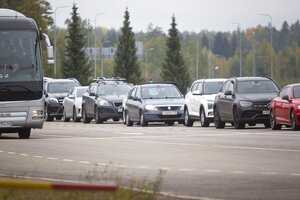 Cars coming from Russia wait in lines at the Vaalimaa border check point between Finland and Russia in Virolahti, Eastern Finland Wednesday, Sept. 28, 2022. The mass exodus of men — alone or with their families or friends — began Sept. 21, shortly after Putin’s address to the nation, and continued all this week. Early on, they snapped up airline tickets, which spiked in price on the few airlines still flying out of Russia. But the rest had to gas up their cars and join the long lines snaking on roads toward the borders. (Sasu M'kinen/Lehtikuva via AP)

HELSINKI, Finland (AP) — Finland announced it would ban Russian citizens with tourist visas from entering the country starting Friday, curtailing one of the last easily accessible routes to Europe for Russians trying to flee a military mobilization aimed at bolstering the Kremlin’s war in Ukraine.

With the exception of Norway, which has only one border crossing with Russia, Finland has provided the last easily accessible land route to Europe for Russian holders of European Schengen-zone visas.

“The decision in principle aims to completely prevent Russian tourism to Finland and the related transit through Finland,” Foreign Minister Pekka Haavisto said during a news conference Thursday.

The government justified its decision by saying that continued arrivals of Russian tourists in Finland is endangering the country’s international relations and cited security concerns related to Russia’s war in Ukraine, the “illegal” referendums arranged by Russia in parts of Ukraine and recent sabotage in the Nord Stream gas pipelines from Russia under the Baltic Sea.

As of Sept. 1, Finland slashed the number of visas — including for tourism purposes — issued to Russian citizens to one-tenth of the typical number, in a show of solidarity with Ukraine.

Haavisto had earlier said he was particularly worried about Russian tourists flying through Helsinki airport to other European nations to circumvent flight bans imposed after Russia’s Feb. 24 invasion of Ukraine.

Follow all AP stories on the war in Ukraine at https://apnews.com/hub/russia-ukraine.