Fire conditions to linger through Tuesday in San Antonio area 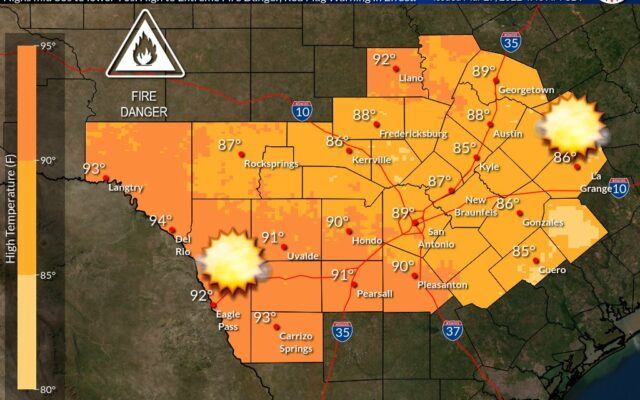 A Red Flag Warning was in effect for the area Monday through 8 p.m. as a fire burned through Medina County torching more than 1,000 acres. The warning will be in effect again Tuesday from 10 a.m. to 8 p.m.

The conditions contributing to the fire concern include gusting winds, dry air and dry vegetation.

The Das Goat fire started Friday after a car fire jumped to brush and spread. Officials said it was 70% contained Monday afternoon as nearly 20 state agencies and more than 200 firefighters work to stop the blaze from spreading further.

Officials say that residents can take a number of preventative measures to keep fire chances to a minimum that includes not using lawn mowers on dry vegetation during heightened fire conditions, keeping lawns green and mowed ahead of heightened conditions, soaking ashes and charcoal from sources like barbecue grills to avoid them reigniting even days later.

Wildfires are also at risk of starting when residents throw used cigarettes and matches out of windows in addition to simply parking cars on dry grass or hauling trailers with chains hanging to the ground.

The NWS reports there is a line of severe thunderstorms forecasted to move into Texas late Tuesday night, but the rain chances will dissipate before morning breaks. Dry weather and gusty conditions are forecasted through the weekend.

03/28/2022 1:23 PM CDT: Severe thunderstorms are expected across the Plains states tomorrow/Tuesday afternoon and night. Damaging gusts, large hail, and isolated tornadoes are all possible. More details can be found at https://t.co/cM2G0CEbkz pic.twitter.com/P7wIFky9SP

The line of storms is at risk of developing hail, damaging winds and isolated tornadoes from San Marcos northward. According to the forecast, San Antonio may experience some lingering thunderstorms.

The NWS said this year’s wildfire activity stems from wetter-than-normal conditions last year that allowed the grass to grow more than usual before drying it out due to drought conditions, essentially leaving tinder waiting to be set ablaze in the right conditions.