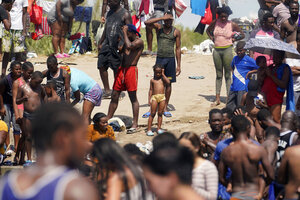 Haitian migrants gather on the banks of the Rio Grande after they crossed into the United States from Mexico, Saturday, Sept. 18, 2021, in Del Rio, Texas. U.S. President Joe Biden's administration is nearing a final plan to expel many of the thousands of Haitian migrants who have suddenly crossed into the Texas border city from Mexico and to fly them back to their Caribbean homeland. (AP Photo/Eric Gay)

New York City is joining D.C as a drop off location for the busing strategy which Abbott says is a response to the lack of action by the Biden administration to help with the overwhelming influx of migrants showing up at the Texas border.

“Because of President Biden’s continued refusal to acknowledge the crisis caused by his open border policies, the State of Texas has had to take unprecedented action to keep our communities safe,” said Governor Abbott. “In addition to Washington, D.C., New York City is the ideal destination for these migrants, who can receive the abundance of city services and housing that Mayor Eric Adams has boasted about within the sanctuary city. I hope he follows through on his promise of welcoming all migrants with open arms so that our overrun and overwhelmed border towns can find relief.”

Since the busing strategy began in April, more than 5,000 migrants have been sent to Washington D.C. Mayor Muriel Bowser has since requested the help of military troops to help with the influx. Similar action by Abbott in Texas, where hundreds of thousands attempt to cross the border every month, resulted in public outcry from immigrant rights advocates.

Abbott has invited the Mayor’s of D.C. and N.Y.C to visit the border to see what those communities are faced with. Neither has accepted the invitation.

New York is one of the few American cities with a right to housing law. That means the city is required to provide emergency shelter for every unhoused person.