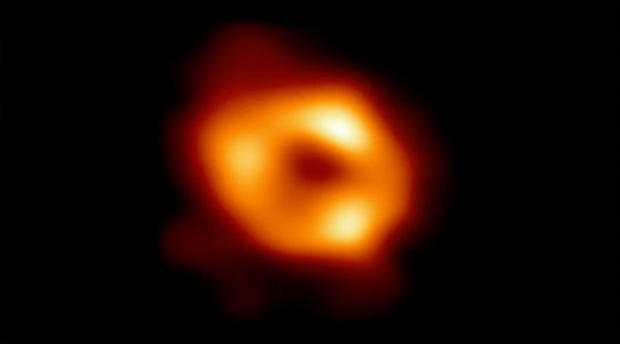 The black hole at the center of the Milky Way, known as Sagittarius A*, or Sgr A. EHT Collaboration

Three years after capturing the first image of a supermassive black hole in a galaxy 55 million light years away, astronomers have managed to “photograph” the gaping maw of the smaller but much closer black hole lurking at the core of Earth’s Milky Way, researchers announced Thursday.

The 2019 target was a mind-boggling black hole in the core of M-87, a giant elliptical galaxy in the constellation Virgo, a hole with the mass of 6.5 billion suns. Its enormous gravity pulls surrounding material into a disc, accelerating it to nearly the speed of light and heating it to extreme temperatures, resulting in torrents of radiation that can be seen from Earth.

The black hole at the center of the Milky Way, known as Sagittarius A*, or Sgr A* for short, is much closer, about 26,000 light years from Earth, but it is much smaller, packing the mass of 4 million suns into an area much smaller than Earth’s solar system.

The M-87 black hole‘s 6.5 billion solar masses would fill the entire solar system. The 4-million-solar-mass black hole at the heart of the Milky Way would fit within the orbit of Mercury.

By definition, black holes cannot be directly observed because nothing, not even light, can escape the crushing inward force of their titanic gravity.

But their presence can be indirectly detected by observing the effects of that gravity on the trajectories of nearby stars and by the radiation emitted across the electromagnetic spectrum by material heated to extreme temperatures as it’s sucked into a rapidly rotating “accretion disk” and then into the hole itself.

The motions of stars in the dust-shrouded core of the Milky Way near Sgr A* have been closely monitored for the past two decades, allowing astronomers to calculate the mass of the invisible body warping their trajectories.

Andrea Ghez, a professor at UCLA, won the 2020 Nobel Prize in physics for her pioneering studies of Sgr A* and the stars around it.

Astronomers have now managed to directly observe the black hole and its immediate surroundings.

The image captured by the Event Horizon Telescope, combining data from multiple observatories around the world, shows Sgr A*’s dark central core — the shadow of its “event horizon” — surrounded by a lopsided ring of light emitted by particles racing around the hole at nearly the speed of light.

The event horizon is the invisible boundary between a black hole and the rest of the universe, a zone where nothing, not even light, can escape the hole’s gravitational clutches. Gas, dust, wayward stars and the light they emit, anything crossing that invisible line vanishes from the known universe.

The EHT image of Sgr A* is similar in appearance to the historic image of M-87’s huge black hole and closely resembles what astronomers expected based on computer simulations running the equations of Einstein’s general theory of relativity.

To “see” Sgr A*, the Event Horizon Telescope team used an array of radio telescopes in Hawaii, North, Central and South America, Europe and Antarctica.

Using a technique known as very long baseline interferometry, precisely timed data from each radio telescope can be combined to produce images comparable to what an Earth-size dish would detect. The resulting virtual telescope has the highest resolution of any instrument ever built, capable of detecting a doughnut on the moon.

The EHT dishes collected data that filled scores of hard drives, which were physically shipped to researchers in Europe and the United States for processing and analysis.

Stable stars live in a state of “hydrostatic equilibrium,” balancing the inward force of gravity with the outward push of radiation generation by fusion reactions in the core. In the sun, 600 million tons of hydrogen are fused into helium every second to produce the outward radiation pressure needed to offset gravity and maintain stability.

When smaller stars like the sun finally run out of nuclear fuel over billions of years, their cores collapse to a point where quantum forces, not fusion, maintain stability. Such dead, slowly cooling stars are known as white dwarfs.

When more massive stars run out of fuel, core collapse continues past the white dwarf stage.

For collapsing cores with up to three times the mass of the sun, the result is a neutron star, cramming more than twice the mass of Earth’s sun into a body less than 10 miles across. Neutron stars, propped up by a different sort of quantum force, are the densest objects in the visible universe.

For even more massive stars, a different fate awaits. Gravity overcomes all known nuclear forces and core collapse proceeds past the point where it vanishes from the visible universe, leaving behind nothing but an enormously concentrated “gravity well” of deeply distorted space.

Such remnants are known as stellar mass black holes because they are formed by the death of a single star.

A handful of larger intermediate-mass black holes have been found, possible stepping stones to the formation of the supermassive black holes now thought to exist in the cores of all major galaxies. But the details of how such larger holes form is not yet clear.

A major objective of the newly launched James Webb Space Telescope is to help astronomers chart the formation and growth of such black holes in the aftermath of the Big Bang.