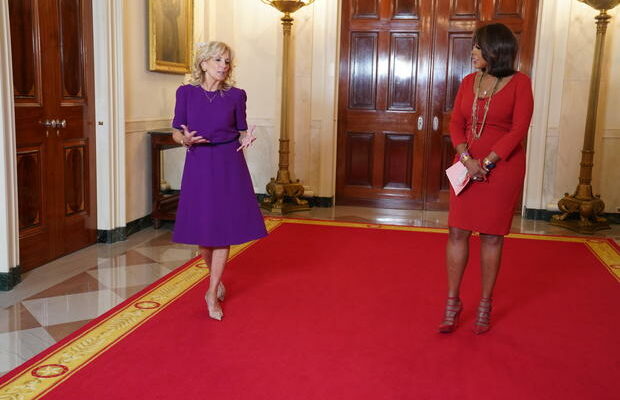 Powell was fully vaccinated, but had suffered from multiple myeloma, a blood cancer that affects white blood cells and can severely compromise the immune system.

The first lady told “CBS Mornings” co-host Gayle King the Bidens were aware Powell was ill, and knew he was in the hospital for several days. But that didn’t ease their reaction to his passing.

The first lady reflected on the memories she and the president shared with the statesman, who made history as the first Black secretary of state. She called him a “great man.”

“It wasn’t long ago that we had a dinner right in that room for Angela Merkel, and Colin Powell was at that dinner,” Biden said. “And he was such a good friend, and such a good friend to so many presidents, Republicans and Democrats.”

President Biden also paid tribute to Powell’s friendship and personal character on Monday, ordering the flags flown at half-staff until Friday. The president declared Powell a “patriot of unmatched honor and dignity.”

“As a senator, I worked closely with him when he served as National Security Advisor, Chairman of the Joint Chiefs of Staff, and as Secretary of State. Over our many years working together — even in disagreement — Colin was always someone who gave you his best and treated you with respect,” the president said in a statement.

The first lady also spoke with King about what it was like trying to teach remotely during the pandemic. She is the first person to work full time while serving as first lady, teaching at Northern Virginia Community College.

“Well, I guess, you know, not being able to be in the classroom like everybody else. To see our students in person. That– that was the frustrating thing to me. I mean, I had to take training to be able to teach online and do it quickly,” she told King.

The first lady also emphasized how important it is that students have access to broadband across the country.