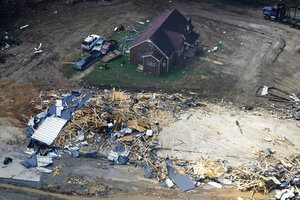 NASHVILLE, Tenn. (AP) — Emergency workers and volunteers in rural Tennessee pushed to clean up as much debris as possible from recent deadly flooding Monday as the remnants of Hurricane Ida threatened to interrupt recovery efforts with another dousing expected overnight through Tuesday.

The Humphreys County Emergency Management Agency noted the possibility of localized flooding in Waverly and other areas hit hard by the Aug. 21 flooding but said it’s “not expected to be the magnitude of last week’s flooding,” citing the National Weather Service.

Authorities are encouraging people to pick up tarps so they can cover their damaged homes and other property. They also said they are watching the forecast and preparing in case the situation becomes dangerous.

“Waverly Department of Public Safety is monitoring the weather and will go into affected neighborhoods to announce should evacuations become necessary,” an emergency agency flood recovery report said Monday.

The flooding killed 20 people as it took out houses, roads, cellphone towers and telephone lines, with rain totals that more than tripled forecasts and shattered the state record for one-day rainfall. More than 270 homes were destroyed and 160 took major damage, according to the Humphreys County Emergency Management Agency.

Much of that destruction centered on Waverly, a small city about 60 miles (95 kilometers) west of Nashville. The town of McEwen near Waverly was pummeled with 17 inches (43 centimeters) of rain, according to the National Weather Service.

The National Weather Service forecast has issued a flash flood watch for central Tennessee from Monday evening through early Wednesday, saying rainfall amounts from what remains of Ida will range from 2 to 5 inches.

So far, more than 800 loads of debris have been hauled to a landfill from the floods that centered on Humphreys County, which has a population of about 18,000.