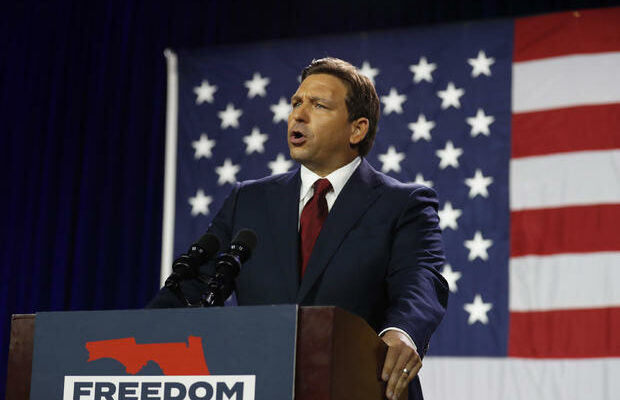 The projected win for DeSantis — a conservative who has become a prominent fixture of the Republican Party in recent years, and is favored as a possible contender for a presidential bid in the 2024 race — came as Florida continues its political shift from swing state to more reliably red. Results from the gubernatorial election showed stronger support for the GOP incumbent from residents of Miami-Dade County, a historically blue metropolitan area, as well from as Latino voters. And it was not the only big victory for Republicans in Florida: Senator Marco Rubio also cruised to a second term.

DeSantis gave a victory speech at his campaign’s headquarters in Tampa and declared that Florida’s electorate had “rewritten the political map.” He denounced what he called “woke ideology” and told a cheering crowd that “Florida is where woke goes to die.”

“We have embraced freedom. We have maintained law and order. We have protected the rights of parents,” said DeSantis, seemingly in reference to Florida’s so-called “Don’t Say Gay” law and Stop W.O.K.E. Act, both of which have faced lawsuits and public backlash. The first of those measures, officially called the “Parental Rights in Education” bill, bans discussions involving sexual orientation and gender identity from instruction in K-3 classrooms, and the second prohibits K-12 schools from teaching critical race theory, among other restrictions.

DeSantis’ reelection and the focus of his victory speech not only reaffirmed the changing political landscape in Florida and potentially foreshadowed the term ahead, they also fueled speculation about his possible run for president in 2024. Former President Donald Trump, whose earlier endorsement helped boost DeSantis but who has also recently taken public jabs at him, has indicated that his own plans to run again are imminent.

Trump told the Wall Street Journal that a possible White House run by DeSantis would be “a mistake,” warning, “If he did run, I will tell you things about him that won’t be very flattering.”

“I know more about him than anybody other than perhaps his wife, who is really running his campaign,” Trump told the news outlet.

DeSantis has not responded outright to Trump’s comments, nor has he announced his intentions for 2024.