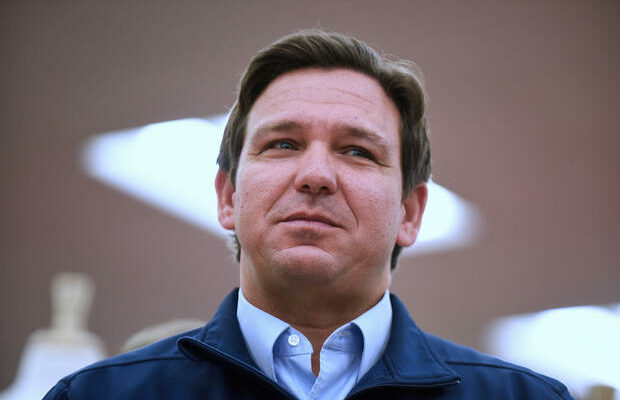 Florida Gov. Ron DeSantis Paul Hennessy/SOPA Images/LightRocket via Getty Images
The Florida Senate Education Committee passed a controversial bill on Tuesday that would bar school districts from encouraging classroom discussion about sexual orientation or gender identity. The Parental Rights in Education bill, commonly referred to the “Don’t Say Gay” bill by its critics, would apply to such topics in primary grade levels, as well as in cases where the discussions are deemed “not age-appropriate.”

The bill, proposed by Republican State Senator Dennis Baxley, would extend to student support services, including counseling, and would require school district personnel to give parents all information related to a student’s “mental, emotional or physical health or well-being,” unless it’s believed that such disclosure would result in abuse. Parents would be able to sue districts that do not follow these requirements.

The bill’s purpose, according to its text, is to “reinforce the fundamental right of parents to make decisions regarding the upbringing and control of their children.”

If Florida legislators pass the bill, it would go into effect on July 1, with all school district plans having to be updated by June 30, 2023.

Florida Governor Ron DeSantis, who supports the bill, said at a roundtable in Miami on Monday that he doesn’t approve of “injecting these concepts about choosing your gender” at schools.

“We’ve seen instances of students being told by different folks in school, ‘Oh, don’t worry. Don’t pick your gender yet. Do all this other stuff.’ They won’t tell the parents about these discussions that are happening,” DeSantis said. “That is entirely inappropriate. Schools need to be teaching kids to read, to write. They need to them them science, history. We need more civics.”

DeSantis said he doesn’t think such conversations are “going on in large numbers,” but that he wants “to make sure that our schools are really focusing on the basics.”

“We don’t want them to be engines to be putting things like the CRT [critical race theory] that we talked about, things that are divisive and are not accurate of course when you start talking about some of the stuff that they’re teaching with it, and making sure that we’re really focusing on the basics,” he said.

A 2019 survey from The Gay, Lesbian and Straight Education Network (GLSEN) found that the school climate in Florida is “not safe” for most LGBTQ students as it is.

The vast majority of LGBTQ youth who responded to the survey said they regularly heard anti-LGBTQ remarks in schools, and about a quarter had experienced physical harassment at school. But 98% of respondents could identify at least one school staff member who was supportive.

Studies have shown that nationally, schools serve as a vital support system for LGBTQ youth.

The Trevor Project’s 2021 National Survey on LGBTQ Youth Mental Health found that of the more than 82,000 youth who responded, only one-third considered their home LGBTQ-affirming, while 50% considered their school to be so.

The organization released a statement on Tuesday condemning Florida’s proposed bill, saying it would result in “erasing LGBTQ identity, history, and culture — as well as LGBTQ students themselves.” The organization also said it would effectively allow schools to “out” students to their parents without their consent.

“Banning speech about sexual orientation and gender identity in Florida classrooms would not only ben an infringement on civil rights, it would erase entire chapters of history, classic literature, and critical health information from textbooks, to say nothing of erasing students themselves,” Sam Ames, the Trevor Project’s director of advocacy and government affairs, said in a statement.

The bill has drawn significant backlash, including from the White House.

“I want every member of the LGBTQI+ community — especially the kids who will be impacted by this hateful bill — to know that you are loved and accepted just as you are. I have your back, and my Administration will continue to fight for the protections and safety you deserve,” said a tweet from President Biden.

“Every parent hopes that our leaders will ensure their children’s safety, protection, and freedom,” a White House spokesperson said in a statement reported by The Associated Press. “Today, conservative politicians in Florida rejected those basic values by advancing legislation that is designed to target and attack the kids who need support the most — LGBTQI+ students, who are already vulnerable to bullying and violence just for being themselves.”

Students and LGBTQ advocates have been protesting the measure for days across the state.

“It’s a radical roll back of the calendar,” Scott Galvin, executive director of Safe Schools South Florida, told CBS Miami last week. “It will stop teachers and schools from talking to kids about LGBTQ issues and it will stop them from talking about gay issues among themselves.”