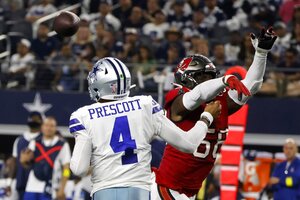 NEW YORK (AP) – No doubt about it – Americans are ready for some football. And they proved it by repeatedly huddling in front of their flat-screens to watch gridiron action.

Nielsen is out with its list of most popular prime-time shows last week.

Topping the list is the game between the Tampa Bay Buccaneers and Dallas Cowboys, with 23.3 million.

Finishing second was the clash between the Buffalo Bills and L.A. Rams, with 19.8 million pairs of eyes on it.

Of the top 10 shows last week, all but one was a football game, pregame show or postgame show.

The only exception was “60 Minutes,” which was eighth.