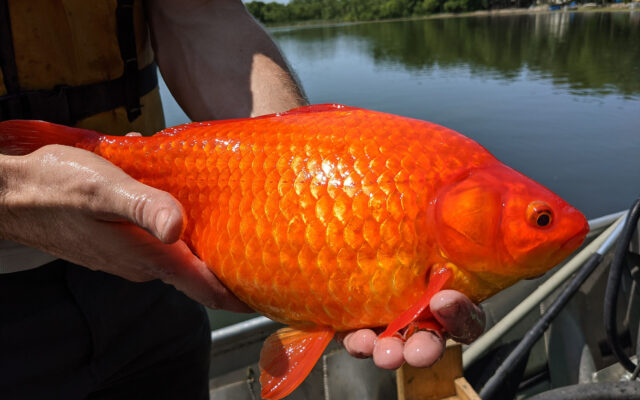 Photo courtesy of City of Burnsville Twitter
Residents in Minnesota are being reminded not to dump their goldfish in ponds and lakes, and for good reason. Someone fishing in Burnsville recently pulled a giant goldfish out of Keller Lake – an odd sight, yet one that is becoming common in the United States.
In a tweet on Friday reminding residents not to dump goldfish, Burnsville officials said goldfish “grow bigger than you think and contribute to poor water quality by mucking up the bottom sediments and uprooting plants.” They said groups of large goldfish were recently found in Keller Lake.

Please don't release your pet goldfish into ponds and lakes! They grow bigger than you think and contribute to poor water quality by mucking up the bottom sediments and uprooting plants.
Groups of these large goldfish were recently found in Keller Lake. pic.twitter.com/Zmya2Ql1E2

Officials in Burnsville, a suburb of Minnesota’s Twin Cities, initially found 10 fish in Keller Lake – but this week, 18 additional fish were found. Some were 18 inches long and weighed about 4 pounds, according to the Associated Press.

According to National Geographic, goldfish are usually 7 to 16.1 inches and weigh 0.2 to 0.6 pounds, but can top five pounds in the wild.

Scientists say goldfish can disrupt the entire ecosystem, according to CBS Minnesota.

The city of Chaska is dealing with a similar problem and recently implemented a three-year plan to manage the invasive species, in an effort to prevent them from ending up in the Minnesota River, CBS Minnesota reports.

Goldfish were detected in Big Woods Lake and Lake Hazeltine in 2019 – and Big Woods Lake is “mostly just goldfish” said Jordan Wein of WSB and Associates.

Wein and his team are tasked with managing the fish – and they’re using a method called “electroshocking” to learn more, CBS Minnesota reports.

“That power sends some electricity into the water and it stuns the fish momentarily,” Wein said. “Enough time for two netters to hang off the front of the boat, take some dip nets and scoop up whatever we are looking for.”

It is the first part of the city’s three-year plan. The team will catch the fish, tag them and release them into the water. Scientist will track where they go and spawn.

“If you are familiar with rough fish they really upset the whole ecosystem,” Sundby said. “They stir up sediment and they can dig three feet down. Then it’s basically a concrete bottom. Nothing is living. Nothing is producing oxygen.”

Sundby said he wants find a way to bring the goldfish numbers down so vegetation and fish like bluegills and sunfish, can return to the lake.

In Virginia, a man recently caught a 3 pound, 9 ounce goldfish in Hunting Creek, a tributary of the Potomac River. The Virginia Department of Wildlife Resources said the nearly 15-pound catch set a record in the state – but the agency reminded people that the introduction of goldfish to bodies of water in the state illegal, CBS affiliate WTKR reports.

The agency said pet owners should never release aquatic animals into the wild due to the possibility of disease, competition and predation.

The Missouri Department of Conservation posted a photo of a fisherman holding up his 9-pound catch earlier this month. Tim Owings caught the giant butterfly koi goldfish at Blue Springs Lake Remembrance.

Earlier this year, a man in Syracuse, New York said he caught a 14.5-inch goldfish in Onondaga Lake, Syracuse.com reports.

In 2020, Greenville County Parks and Rec in South Carolina posted a similar image. “Anyone missing their goldfish?” the department wrote. “This 9lb goldfish was found in Oak Grove Lake during some recent testing at our lakes. The work included electrofishing, a method of measuring the health of the fish population.”

And in 2019, a man in Kentucky caught what appeared to be a giant 20-pound goldfish, using a biscuit as bait, CBS affiliate WKYT reports.

The U.S. Fish and Wildlife Service posted instructions on “how to breakup with your goldfish,” saying pet owners “may be horrified to learn that under the right conditions it will survive and grow. And grow. Like, really BIG.”

“Imagine a goldfish the size of a football and weighing four pounds,” the service wrote. “From Lake St. Clair outside of Detroit to Lake Tahoe in Nevada, large goldfish found in public waters have made the news as they damage waterways with their voracious appetites and their tendency to carry parasites.”

The service said instead of dumping an unwanted goldfish, pet owners can either find it a home with someone who will care for it, or reach out to a veterinarian on how to properly dispose of fish.