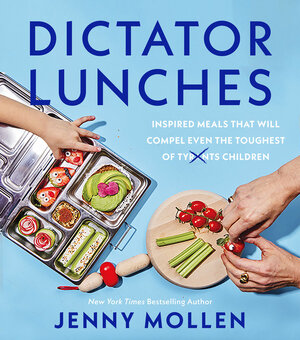 This cover image released by Harvest shows "Dictator Lunches: Inspired Meals That Will Compel Even the Toughest of Children" by Jenny Mollen. (Harvest via AP)

NEW YORK (AP) — When it comes to packing lunch for their kids, moms and dads have reliable favorites like PB&Js, bananas or maybe a bagel. Jenny Mollen has an unusual go-to — candy eyes.

The writer and actor has learned that a pair of edible eyeballs attached to anything she sends will do wonders, making her children snigger as they swallow goofy slices of bell peppers, kiwis or dates.

“Honestly, first of all, just buy yourself some candy googly eyes. They’re tried-and-true,” she said. “You lose something nutritionally having to give them the candy eyes, but you gain so much because they’re going to actually eat more because it’s entertaining.”

Mollen’s tricks — at the intersection of food and craft — are contained in her new cookbook, “Dictator Lunches,” from the HarperCollins imprint Harvest. She offers 40 recipes from breakfasts to dinner, with a special emphasis on what to pack for school lunch.

She uses the term “dictator” in loving respect to Sid and Lazlo, her sons with actor-husband Jason Biggs, who have been known to object to some foods on occasion. But cucumber penguins and Babybel Pokémon delight even the most picky eaters.

There is an edible insect made from a pitted date filled with sunflower seed butter and legs made from pretzels and, of course, candy eyes. There’s also Rice Pandas, with cooked white rice from last night’s Chinese food delivery put in a mold and decorated with eyes, mouth, ears and paws cut out from sheets of dried seaweed.

“I also love piping yogurt into fruit, whether it’s strawberries or raspberries,” she says. “If I pipe some yogurt in, they suddenly look like parfaits. And if I sprinkle a little granola on top, it’s so easy for me — takes 2 seconds — but for them, they think they won the lottery.”

The adorable edible art isn’t as hard to pull of as it might seem. Mollen says you need a few tools — a vegetable peeler, various molds and cookie cutters, a pumpkin carving knife, a repurposed syringe used to administer Benadryl — and then use leftovers in the fridge or items in your pantry.

“It’s really a way for me to sublimate my guilt because I’m a working mom and not the mom doing pick up and drop off. I’m not with them at the park after school every day. I’m usually working. So this feels like a way for me to instill them with a sense of constancy, even when I’m not there, because it’s still so infused with my tone,” she says.

Sarah Pelz, her editor and also a working mom with two school-age picky eaters, says the book is a game-changer, making lunch planning less of a chore, especially the yogurt-into-fruit trick.

“I used to dread packing their lunches, but now I actually enjoy it. I love that Jenny has this kind of philosophy that packing these lunches is an act of love, but it’s also an opportunity to encourage kids to try food or different combinations of foods in a way that they might be resistant to at home,” she says.

Mollen’s humor is everywhere in the fun and sometimes profane book that doesn’t take itself too seriously. “I like my lunches how I like my Korean dictators: full-bodied, eccentric and just a little sneaky,” she writes.

A columnist for Parents magazine, Mollen has meals that include a fruit, a vegetable, a main dish, a snack and a bribe. And while they may be whimsical, she insists they also be nutritious. She recently lobbied to get rid of chocolate milk from her kids’ cafeteria.

“I don’t know if you notice with your kids, it’s like at every turn somebody is trying to give your kid sugar. So a lot of the recipes are low sugar, grain free,” she said.

She hopes that by inspiring kids to eat their vegetables early, they’ll grow up to appreciate healthy foods later. Same thing for international flavors. And if they need to be tricked sometimes, so be it.

“A lot of it is just trying to cram as many vegetables in them as possible and hope for the best because at some point, I’m going to have zero control, right? This ends with a giant insurrection. So that’s how I have to fight the good fight and hope something lands.”

Other recipes include a Green Breakfast Muffin, made from bananas, cinnamon, spinach, almond milk, eggs, oats and maple syrup, and one for Roasted Shiitake Chips, which are cooked to avoid their slimy texture. She likes using sunflower seed butter as glue for her creations.

It may come as no surprise that Mollen grew up loving glue guns and decorated her own headbands. She also made art with varnish: “I was an out-of-work actress for many years, so I’ve done a lot of crafting,” she says, laughing. She says she’s a classic Gemini. “I’m all over the place.”

She started tinkering with school lunches as a way to keep herself entertained. One early stab was using a gingerbread-man cookie cutter on toasted waffles to form a waffle family that almost looked composed of chain-link fencing, her subtle protest at the Trump administration’s border policy.

“It’s really just like, ‘What is lying around?’ ‘What do I want to say today?’ And ‘What’s the season?’ And then just build the story from there,” she said.

“I wanted people to understand that you can sort of go that extra mile without really having the skill set. You just have to have the willingness to show up and just take a stab at it.”