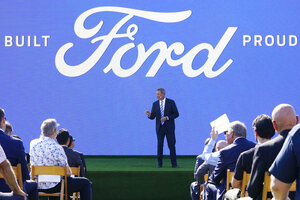 FILE - Tennessee Gov. Bill Lee speaks during a presentation on the planned factory to build electric F-Series trucks and the batteries to power future electric Ford and Lincoln vehicles on, Sept. 28, 2021, in Memphis, Tenn. Ford Motor Co. and a South Korean company would have to create more than 5,000 full-time jobs at a planned electric pickup truck factory and battery manufacturing plant in Tennessee or pay back at least part of a $500 million state grant for the project, according to a lease approved Thursday, Feb. 17, 2022, by a regional board.(AP Photo/Mark Humphrey, File)

NEW YORK (AP) — Ford said that it will run its electric vehicle and internal combustion divisions as two separate businesses.

“We are going all in, creating separate but complementary businesses that give us start-up speed and unbridled innovation in Ford Model e together with Ford Blue’s industrial know-how, volume and iconic brands like Bronco, that start-ups can only dream about,” said CEO Jim Farley in a prepared statement.

A pair of EV start-ups, Lucid Group and Lordstown Motors released disappointing production projections this week, highlighting how difficult it is to secure materials and scale up in the auto industry.

Ford is already developing electric vehicles like the Ford GT, Mustang Mach-E SUV and F-150 Lightning pickup and it operates an EV division in China.

Ford also has Ford Pro, which serves as a one-stop shop for commercial and government customers with a range of conventional and electric vehicles and a full suite of software, charging, financing, services and support on Ford and non-Ford products.

37 mins ago
Connect With Us Listen To Us On