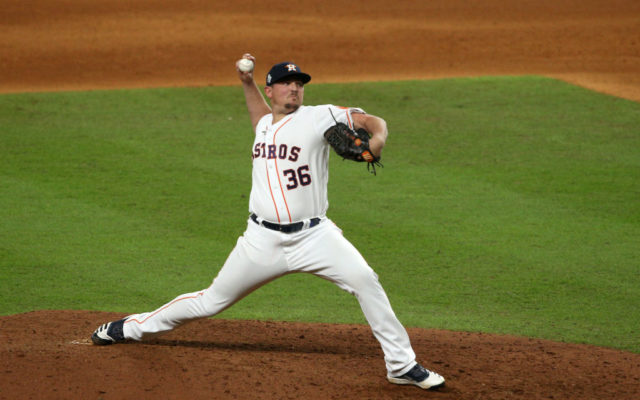 HOUSTON, TEXAS - OCTOBER 22: Will Harris #36 of the Houston Astros delivers the pitch against the Washington Nationals during the eighth inning in Game One of the 2019 World Series at Minute Maid Park on October 22, 2019 in Houston, Texas. (Photo by Bob Levey/Getty Images)

Relief pitcher Will Harris is joining the Washington Nationals after they beat him in Game 7 of the World Series against the Houston Astros.

Harris and the Nationals have agreed to a $24 million, three-year contract, the team announced Friday.

The 35-year-old Harris dominated with Houston for much of the postseason, starting October with nine consecutive scoreless innings. The Nationals finally got to him late in the World Series, and Harris allowed Howie Kendrick’s go-ahead home run in Game 7.

Washington went on to win its first World Series. Harris was stuck with the loss.

Harris will try to bolster a bullpen that was among the worst in baseball last season. Nationals relievers blew 29 saves and had a 5.68 ERA, both worst in the NL. Harris is likely to slot behind left-hander Sean Doolittle as the team’s top setup man.