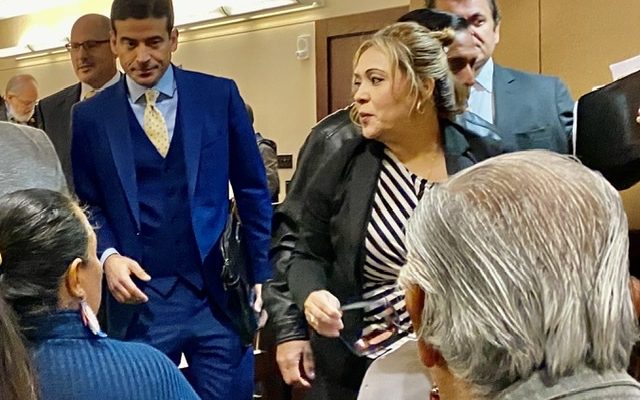 Vela, who’s a candidate in the Democratic primary for Bexar County Sheriff, was accompanied by several attorneys Wednesday morning, including former Bexar County District Attorney Nico LaHood, whose law firm is representing her.

“We’re not afraid of a fight and she deserves good, honest representation,” said LaHood.  “She has a good team working for her, so God willing, the right result will come from this.”

Vela faces felony charges of aggravated perjury and tampering with evidence, in addition to misdemeanor charges of official oppression. The case is the result of an investigation by the FBI and Texas Rangers.

LaHood says today’s court proceeding was part of  the information-gathering process as they work with  various law enforcement agencies  to see what evidence they have. They’re also working on court schedules.

“At this point, we’ve seen nothing that worries us,” said LaHood.  “She maintains her innocence and we stand with her.”

Vela’s court appearance comes one day after she participated in a town hall featuring sheriff’s candidates hosted by KTSA’s Jack Riccardi. She was asked if an individual under indictment should be allowed to serve in an elected office.

Vela didn’t elaborate on the charges against her, but she did say justice always prevails and “I have a strong leadership and a strong dedicated team behind me.”

When asked at the courthouse Wednesday morning if Vela is still a candidate in the sheriff’s race, LaHood replied that she was heading directly to the early-voting polls to continue campaigning following the court proceeding.