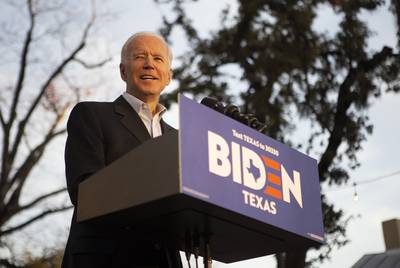 Several former prominent supporters of Julián Castro in his home state are endorsing Joe Biden for president now that the Texan is no longer running — and a day after he threw his support to Biden rival Elizabeth Warren.

In an announcement first shared with The Texas Tribune, Biden’s campaign unveiled 11 new Texas endorsements, including nine from people who had been with Castro. They include five state representatives and members of the Mexican American Legislative Caucus: Reps. Rafael Anchia of Dallas, Ryan Guillen of Rio Grande City, Eddie Lucio III of Brownsville, Oscar Longoria of Mission and Armando “Mando” Martínez of Weslaco.

Biden’s campaign hailed the endorsements as “reflective of the momentum Joe Biden has going into Super Tuesday,” or March 3, when Texas holds its delegate-rich primary.

“Many of these community leaders previously endorsed Secretary Castro and are now supporting Joe Biden because they know that Biden has the experience, record, and heart to step into the Oval Office and immediately deliver for working families,” Biden’s Texas state director, Jane Hamilton, said in a statement.

The former vice president’s campaign released the endorsements the day after Castro endorsed Warren, the U.S. senator from Massachusetts — a quick turnaround following his withdrawal from the race Thursday. The endorsements also come hours before Castro and Warren are set to hold a rally together in New York City.

While Warren’s campaign has been the most proactive in formally organizing in Texas ahead of the primary, Biden has consistently topped polls here and built a much longer endorsement list. Michael Bloomberg, the former New York City mayor, is also laying the groundwork for what his campaign has promised will be an unmatched effort in the state.

Most of the endorsements Biden announced Tuesday represent Democrats who were among Castro’s earliest endorsers. Martínez, Lucio, Anchia, Guillen, Rodriguez and Wolff were all part of the first wave of Texas endorsements that Castro released in March 2019.

Biden is returning to Texas next week for his fifth trip to the state as a White House hopeful. He so far has fundraisers scheduled for Jan. 16 in Dallas and Houston.