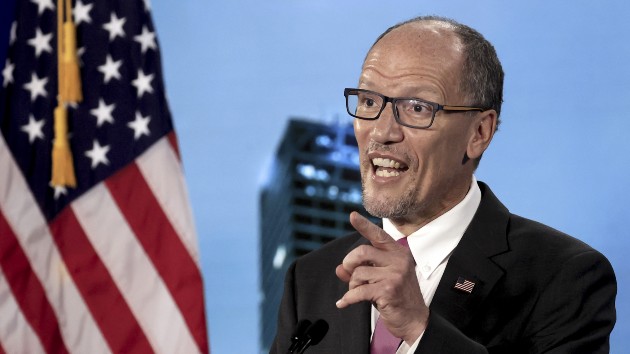 (WASHINGTON) — After months of speculation, former Democratic National Committee Chair Tom Perez announced his candidacy in the race for Maryland Governor on Wednesday.

In a video announcing his run, Perez highlights his early life and ties to the Obama administration, including a clip of former President Barack Obama calling him “one of the best secretaries of labor in our history.”

“My parents came here as immigrants from the Dominican Republic. I never would have dreamed in a million years that the president of the United States would have given me opportunity to make such a difference. We did get a lot done, but there’s so much more to do,” Perez says in the video.

In addition to serving as labor secretary, Perez also worked in the Obama administration as part of the Justice Department, leading the Civil Rights Division. Most recently, he chaired the Democratic National Committee through the 2018 midterms and the 2020 general election.

Perez, who lives in Maryland’s Montgomery County, draws his professional connection to the state through his past in community organizing. In 2002, he became the first Latino elected to the Montgomery County Council. He also served as the board president of CASA de Maryland, a Latino and immigration advocacy and assistance group and frequently touts his tenure having led to the organization’s rapid growth.

With the primary matchup still more than a year away, Perez joins a crowded field of Democratic hopefuls that already includes several high-profile figures in Maryland politics.

Maryland’s current governor, Republican Larry Hogan, is term limited and cannot seek reelection. His absence from the contest opens the race to new leadership regardless of which party eventually comes out on top.

The state’s politically divided branches of government — where Democrats currently hold a majority in the legislature and Hogan serves as the executive — is likely to put a spotlight on the race next year as Democrats hope to expand their national reach.