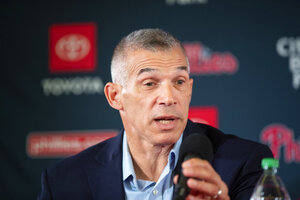 CHICAGO (AP) — Former Philadelphia Phillies manager Joe Girardi has joined Marquee Sports Network as a game analyst for the Chicago Cubs, one of his former teams.

Marquee said Wednesday that Girardi will Jon Sciambi and former big league pitcher Jim Deshaies in the booth for this weekend’s series against Milwaukee. He also will work next month’s series at Miami.

“Growing up a Cubs fan and then having the chance to play for the team for a number of years, I’m honored to now have the opportunity to broadcast from the historic television broadcast booth,” Girardi said in a statement.

Marquee Sports Network is jointly owned by the Cubs and Sinclair Broadcast Group.

The 57-year-old Girardi was the manager in Philadelphia before he was fired in June. He had a 132-141 record over three years with the Phillies.

Girardi also has managed the Marlins and New York Yankees. He skippered the Yankees to a 910-710 record in 10 seasons, including the franchise’s last World Series championship in 2009.

The Peoria, Illinois, native played college ball at Northwestern before he was selected by the Cubs in the fifth round of the 1986 amateur draft. The catcher made his big league debut with Chicago in 1989 and spent 15 years in the majors, finishing with a .267 batting average, 36 homers and 422 RBIs.