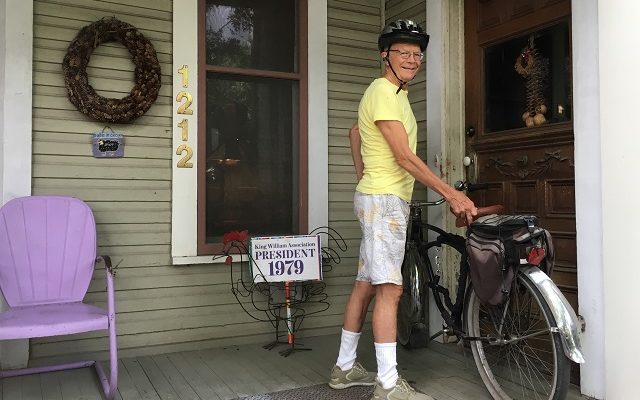 SAN ANTONIO (KTSA News) – For most South Texans, air conditioning is a necessity, not a luxury.  Unfortunately, many can’t afford it, but you may be surprised to learn that some people actually choose to live without it.

Retired attorney Mike Casey, who owns a two-story home in King William, considers it “an extravagance.”

“I’m a firm believer that we’ve got to address the problem of climate control,” he said during a recent interview at his home.

With the living room ceiling fan on, this reporter felt surprisingly comfortable on that warm July morning. Otherwise, the interview may have been cut short or taken outdoors. The large, shady trees around the home also help keep it cool.

“I’m not a martyr. If I were uncomfortable, I would admit that and get an air conditioner,” Casey told KTSA News.

If your central air has ever gone out during the summer, you’ve probably gotten pretty creative with methods to keep cool. You know how miserable it can be to sleep at night with no air conditioning because even with fans going, they just seem to be circulating hot air.

Some people put ice or an ice pack in a bowl in front of a fan to give the air a chill. You can put a frozen water bottle at the foot of your bed, and some people put their bed sheets in the freezer just before bedtime.

Casey says his bedroom gets so cool, he has to cover up.  That’s because his bedroom is actually outdoors.

“I sleep on the back porch and I wake up in the morning covered up with a sheet because it’s too cool,” he said.  Casey says sometimes, he has to use a blanket.  Yes, even on those hot summer nights in July and August.

In addition to a bed, Casey has a dining room table, which he also uses as a desk,  and a hammock on his screen porch. Most of the homes in his King William neighborhood were built more than a hundred years ago before residential air conditioning.

“Ceilings are 12 feet tall and the walls are thick,” Casey noted.

For his friends who can’t stand to be in a home that’s warmer than 75 degrees in the summer,  Casey does have  window units in a couple of rooms upstairs.

“I’ve got air conditioning in my guest bedrooms if you want it, but I don’t need it,” he said. “I am concerned, as all of us should be about global warming. I can do my part by staying comfortable without air conditioning,” said Casey.

The 78-year-old rarely drives his car. He prefers to ride his bicycle to check on things at Isaac Maxwell Metal Studio where he’s a business partner with Gregorio Rebolla. Casey also rides his bicycle to the gym three times a week and yoga classes twice a week.