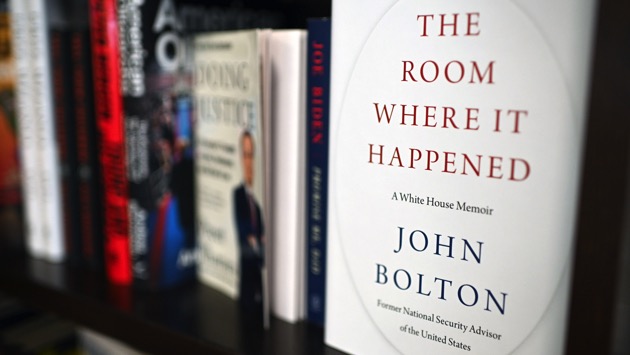 Copies of the book "The Room Where it Happened" a memoir by former US national security advisor John Bolton are for sale at Barnes & Noble in Glendale, California on June 23, 2020. - The Trump administration tried unsuccessfully to block publication of Bolton's book claiming it contained classified national security information.Former US national security advisor John Bolton said Sunday he thinks North Korean leader Kim Jong Un "gets a huge laugh" over US counterpart Donald Trump's perception of their relationship. Bolton spoke to ABC News for his first interview ahead of the Tuesday release of his tell-all book, which contains many damning allegations against Trump. (Photo by Robyn Beck / AFP) (Photo by ROBYN BECK/AFP via Getty Images)

Ellen Knight, the career NSC official who was first tasked with reviewing Bolton’s book, The Room Where It Happened, and consulted with Bolton on removing any classified information, alleges a pressure campaign from officials in the White House and Justice Department to force her to reverse her position to help their standing in the case.

The development could significantly complicate the Justice Department’s efforts to seize Bolton’s profits or charge him criminally under the Espionage Act for mishandling classified information.

According to Knight, it was 10 days before the start of Trump’s impeachment that the NSC legal team requested a copy of Bolton’s manuscript and “then immediately started playing what was, in her experience, an outsize role in the review process.”

Knight says Bolton’s attorney Chuck Cooper at one point requested that her staff “prioritize the Ukraine chapter in the manuscript for prepublication review to make it publicly available during the impeachment trial,” but “the then-Deputy NSC Legal Advisor [Michael] Ellis instructed her to temporarily withhold any response.”

Prior to joining the White House Ellis was former counsel to the House Intelligence Committee when it was led by Rep. Devin Nunes.

Knight says she was “also regularly instructed by Mr. Ellis … not to use email in her communications with NSC Legal about her interactions with Mr. Cooper and Ambassador Bolton and instead to use the telephone.”

Bolton’s book confirmed in essence the allegations at the heart of the impeachment trial, with direct recollection of Trump’s pressure campaign against Ukrainian President Volodymyr Zelensky to announce an investigation into his political opponent former Vice President Joe Biden.

Knight, according to her lawyer Kenneth Wainstein, says at one point she was sat down for a four-hour session with members of the White House and NSC legal counsel including John Eisenberg and Patrick Philbin who she says “were trying to get her to admit that she and her team had missed something or made a mistake [in determining there was no longer classified information in the manuscript], which mistake could then be used to support their argument to block publication.”

“To their consternation, Ms. Knight was able to explain the clear and objective reasoning behind her team’s decision-making as to each of the challenged passages,” the filing says. “Having failed to secure Ms. Knight’s concession that this could all be chalked up to a difference between opinions, they changed tack and tried to persuade her to sign a declaration that purported to explain her role in the process.”

Over what she outlines as five days and 18 hours worth of meetings with White House and DOJ attorneys, Knight says she “voiced her concerns about the fairness and objectivity of the process being followed” and that she specifically asked “how it could be appropriate that a designedly apolitical process had been commandeered by political appointees for a seemingly political purpose.”

“The attorneys had no answer for her challenges, aside from a rote recitation of the government’s legal position that Ambassador Bolton had violated his contractual obligations by failing to wait for written clearance,” the filing says. “However, when Ms. Knight speculated that this litigation was happening “because the most powerful man in the world said that it needed to happen,” several registered their agreement with that diagnosis of the situation.

Knight also describes retaliation within the White House when she refused to sign a declaration the White House and attorneys from the Justice Department wanted to use in their lawsuit against Bolton.

After being promoted in December 2019 to her career senior director position in the NSC and given assurances she would be hired as staff, Knight says that after refusal her “interaction with her leadership and NSC Legal all but ceased until June 22, when she received an automated email advising her that her detail would end in 60 days.”

The Justice Department and White House did not immediately respond to a request for comment.

The revelations from the filing could serve to bolster the case from Bolton and Cooper that because the White House allegedly politicized the prepublication review he was justified in moving forward with publication of the book.

In a statement Wednesday, Cooper said that he had no involvement in Knight’s decision to submit the filing to district Judge Royce Lamberth.

“We received the letter from Ms. Knight’s lawyer, Mr. Wainstein, late last night, and we are still assessing its implications for the Justice Department’s lawsuit,” Cooper said. “We did not solicit the letter in any way; it came as a complete surprise.”

It’s unclear how Lamberth might react Knight’s disclosures. He previously issued a ruling in the case that spelled trouble for Bolton stating that he agreed with the government’s argument that the book contained highly classified material — essentially paving the way for the government to possibly charge Bolton criminally under the Espionage Act.

“This was Bolton’s bet: If he is right and the book does not contain classified information, he keeps the upside… but if he is wrong, he stands to lose his profits from the book deal, exposes himself to criminal liability, and imperils national security. Bolton was wrong,” Lamberth said.