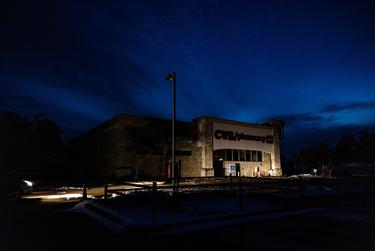 A CVS Pharmacy in South Austin is lit only by the lights of a parked car. Various parts throughout the state lost power as a result of the winter storm. Credit: Jordan Vonderhaar for The Texas Tribune

Four board members of the Electric Reliability Council of Texas, the entity that manages and operates the electricity grid that covers much of Texas, will resign on Wednesday, according to a notice to the Public Utility Commission.

All four of the members who are resigning live out of state.

Sally Talberg, board chair; Peter Cramton, vice chair; Terry Bulger, finance and audit chair; and Raymond Hepper, human resources and governance committee chair, will resign at the end of the ERCOT board meeting Wednesday morning, according to the notice.

ERCOT board members had come under fire last week when it was reported that four of the board members did not reside in the state. ERCOT officials, during a press conference last week, said it had removed personal information about the directors from its website because the board members were experiencing harassment.

The board has also been criticized for its handling of last week’s mass power outage during a winter storm that has claimed the lives of dozens of Texans. More than 4.5 million customers were without power at one point last week.

Talberg, a former state utility regulator who served on the Michigan Public Utility Commission from 2013 to 2020, lives in Michigan. Talberg has sat on various state, regional and national boards and committees involving electricity, natural gas, oil, infrastructure and telecommunications issues. Cramton, a professor of economics at the University of Cologne and the University of Maryland, lives in Germany. Cramton has focused his research on electricity and financial markets. He has advised numerous governments and has been on the ERCOT board since 2015.

Fifteen directors serve on the ERCOT board, including four unaffiliated directors. The vacancies will not immediately be filled.

“The Board Chairman, Board Vice Chairman and both Committee Chairman leadership roles will be vacant,” according to the notice submitted by attorneys representing ERCOT.

An ERCOT spokesperson was not immediately available for comment.