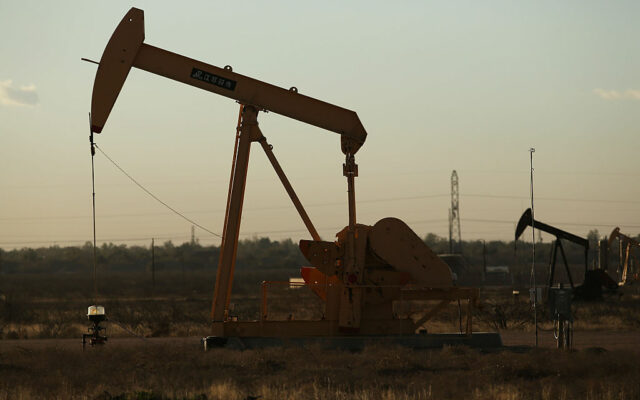 MIDLAND, TX - JANUARY 21: A pumpjack sits on the outskirts of town in the Permian Basin oil field on January 21, 2016 in the oil town of Midland, Texas. Despite recent drops in the price of oil, many residents of Andrews, and similar towns across the Permian, are trying to take the long view and stay optimistic. The Dow Jones industrial average plunged 540 points on Wednesday after crude oil plummeted another 7% and crashed below $27 a barrel. (Photo by Spencer Platt/Getty Images)

The Laredo congressman said switching to renewable energy is still something that will happen, but it is not happening instantly.

In fact, Texas has proven to be strong in both conventional and renewable energy production.

“Texas is number one in oil and gas in the country and we’re also number one in wind, so we can have both,” Cuellar told KTSA’s Jack Riccardi Thursday. “Oil and gas, we understand there has to be a transition at some time in the future.  But, it’s not going to happen tomorrow.”

Cuellar, along with his colleagues, sent the letter requesting the Biden administration reconsider it’s banning of using federal lands to drill for oil and gas.

He said putting a stop to the Keystone XL pipeline is also a big mistake.

Cuellar explained that along with the jobs losses killing the plan would have — which will eliminate thousands of well-paying jobs in the state — it will negatively impact city, county, and school district budgets in energy producing areas.

“United Independent School District in Laredo gets about over $60 million from the mineral interests,” the Democrat explained.  “If you take $60 million away, that means that they have to raise taxes in the amount of $60 million or they have to lay off teachers.”

He also pointed out there is still a continued need and demand for oil and gas products, by the very people who are seeking to ban them.

“A lot of times people that talk about fossil fuels, they still fly around — fossil.  They still drive cars, most of them are probably not electric cars, so fossil fuel is still needed.”

“Let’s not make the gas and energy industry an enemy,” Cuellar told Riccardi.  “Let’s work with them.  Let’s bring them to the table and let’s see how we can work together.”

Riccardi asked the congressman if he made a mistake in supporting Biden in the 2020 election since he is making decisions that are negatively impacting Texas.  Cuellar said that while he and the new president may disagree about some policy areas, like energy and the environment, he said that he fully supports the new administration.