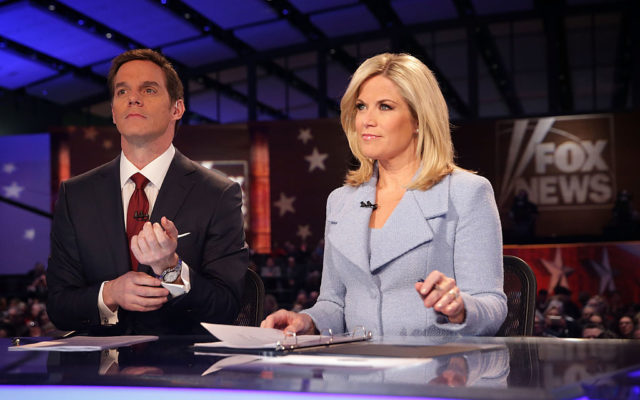 DES MOINES, IA - JANUARY 28: Moderators Martha MacCallum (R) and Bill Hemmer (L) wait for the beginning of the first forum of the Fox News - Google GOP Debate January 28, 2016 at the Iowa Events Center in Des Moines, Iowa. Residents of Iowa will vote for the Republican nominee at the caucuses on February 1. (Photo by Alex Wong/Getty Images)

NEW YORK (AP) — Bill Hemmer is not Shepard Smith, and no one should expect him to be.

The 55-year-old news anchor is a familiar face to Fox News Channel viewers, and will jar none of them Monday when he takes over the 3 p.m. ET news hour that Smith vacated when he abruptly quit the network late last year.

Smith, who gained a following from some non-Fox watchers for his missives against the Trump administration, cultivated a reputation for bluntly confronting the president and even fellow Fox personalities when he felt they misled people. That made him a target for criticism from some Fox viewers — and often President Donald Trump.

As for Hemmer, he’s rarely in the news himself and has no interest in making opinion part of his job.

“I will be playing golf in Florida before that ever happens,” Hemmer said. “I don’t walk in the door thinking about 100 ways to change government. I don’t think that way. I don’t believe I’m built that way. I’m much more comfortable in this news lane than I would ever be as an opinion anchor.”

Hemmer has anchored the midmorning hours at Fox since 2009. The Cincinnati native, who’s now enough of a New Yorker to be afflicted with Knicks fandom, joined Fox from CNN in 2005. He was pleased but not necessarily surprised to get the promotion, which also comes with a greater role in breaking news stories, and took only 24 hours to accept it.

When Hemmer was named to Smith’s time slot, the liberal watchdog organization Media Matters for America issued a news release, saying he had a history of pushing Republican talking points. It said the promotion illustrated that Fox was committed to pushing a pro-Trump line.

Asked for examples, Media Matters cited a Hemmer discussion last November about homeless villages in San Francisco. “It will blow your mind,” he said. “They have working televisions inside.”

When Hemmer interviewed Sen. Rand Paul, who opposed the killing of Iranian Gen. Qasem Soleimani, he noted that the Kentucky Republican had called it the “death of diplomacy.” Hemmer asked, “Was there much diplomacy to begin with?”

But some of the examples Media Matters offered date back nearly a decade, with others illustrating the adversarial role a journalist sometimes must take.

Madeline Peltz of Media Matters said that what Hemmer has said in his job is not as important as what has not been said, “the fact that he has not stood up for the truth.”

“He really has a completely open mind to opinions on all sides and where the truth lies, and he has been doing it that way back to his time at CNN,” Clemente said. “He comes from the heartland, a big Ohio family, and I think he has a real appreciation” for what people are thinking away from the coasts.

Hemmer is aware that the majority of Fox’s audience is conservative and supports Trump, “but I don’t think he’s playing to the audience,” he said.

Sometimes impressions can be built on subtleties.

Last month, Hemmer interviewed Michigan Democratic Rep. Elissa Slotkin, who at the time was undecided on how to vote on Trump’s impeachment. Most of Hemmer’s questions seemed to come from one perspective: He asked whether she’d be voted out if she supported impeachment and whether she thought the punishment fit the accusations. He also asked Slotkin to respond to Republican charges that the process was unfair.

Hemmer, discussing the interview later with The Associated Press, said the questions were framed that way because Slotkin was a Democrat.

He pushed back on any notion that he will make a Trump-friendly show, or that he’d be concerned about upsetting Trump fans who might strike back on social media.

If over that period the audience judges that he and his show are fair, he will consider it a success, Hemmer said.

Hemmer called Smith “arguably one of the best breaking news anchors” that television has ever known and said he’s been a friend since their days covering the aftermath of the disputed 2000 election. Hemmer’s ubiquity on that story gave him the nickname “chad lad.”

But he wasn’t interested in talking about Smith’s style, or if he felt any additional pressure heading into the time slot.

If someone says something that is inaccurate on the show, “we’ll call ‘em on it,” Hemmer said. Just this week he did battle with Trump counselor Kellyanne Conway, twice asking about the truth of former Rudolph Giuliani associate Lev Parnas’ accusations against the president, without getting a direct answer.

“A free press in America is essential to the American system,” Hemmer said. “It’s not going to change, whether Shepard’s the anchor or I’m the anchor.”