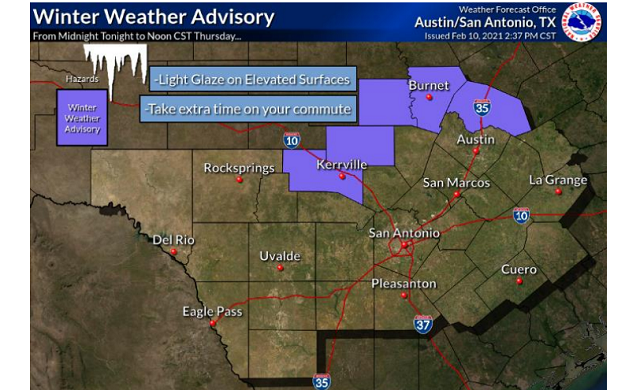 SAN ANTONIO (KTSA News) – The National Weather Service is predicting rain mixed with freezing rain in parts of the Hill Country and the IH 35 corridor near Georgetown overnight. A Winter Weather Advisory  has been issued  from late Wednesday through Thursday morning for Llano, Burnet, Williamson, Kerr and Gillespie counties.

A light glaze of ice is possible on elevated surfaces with accumulations of one-tenth of an inch or less.

“We’re not too worried about any widespread ice issues locally, but it’s going to be cold now until early next week,” said Yura. “From Kerrville northward or further west, temperatures may be  be hovering around the freezing mark, and with the rain falling, there could be some issues up there.”

He said it’ll be much colder late this week into early next week, with the best chance for snow in Bexar County and the Hill country coming late Sunday into early Monday.  Yura says they’ll get a better idea later this week about when to expect a wintry mix in the San Antonio area.