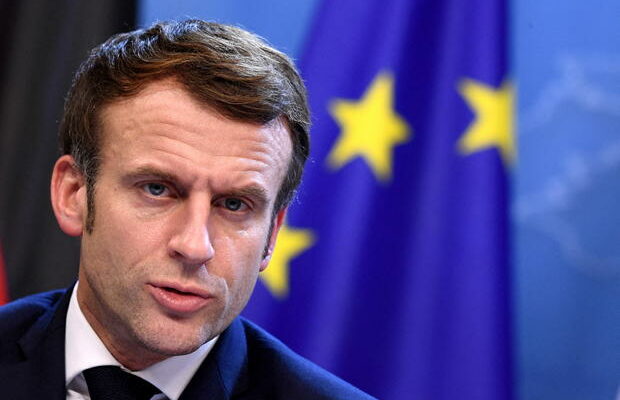 French President Emmanuel Macron speaks at a news conference at the European Council Building at the EU headquarters in Brussels, Belgium, in a December 17, 2021 file photo. John Thys/Pool via Reuters
▶ Watch Video: Biden warns some unvaccinated Americans will “needlessly die”
Paris — French president Emmanuel Macron has promised to make life miserable for people who refuse to get vaccinated against COVID-19. Using some very unpresidential language in an interview with Le Parisien newspaper, Macron said he wanted to reduce the “tiny minority” of wilfully unvaccinated French people by “bugging them” into action.

“How do we reduce that minority? We reduce it, sorry to say it, like that, by bugging them even more. I’m not in favor of pissing off the French,” he said. “But the unvaccinated, I really want to bug them. So, let’s keep doing that, right to the end. That is the strategy.”

France has just begun inoculating children over the age of five, but more than 77% of the country’s total population has already been fully vaccinated. Health officials remain concerned, however, about those who have yet to come forward for even a first shot.

“In democracy, the worst enemy is lies and stupidity. We are putting pressure on the unvaccinated by limiting, as much as possible, their access to social activities,” Macron said.

He used the French slang term “emmerder” in his statement, which translates politely as “to make their lives miserable,” but the words can also be translated in a far cruder way, including harsh profanity. That prompted immediate criticism from his opponents on the right and far-right of French politics, who objected to both the language, and the idea.

Macron said he preferred the tactic, however, to making vaccination legally mandatory, as has been done in some other countries. Instead, French lawmakers are currently debating a bill to tighten the rules on how to get the COVID pass that’s required for entry to bars and restaurants, all social activities, and for long-distance transport.

At the moment, a recent negative COVID test is enough to get the pass, but if the bill goes into law on January 15, only those who have been vaccinated will be able to get one.