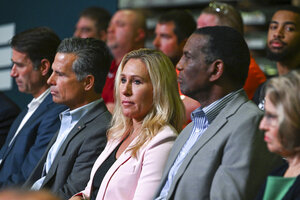 FILE - Rep. Marjorie Taylor Greene, R-Ga., listens as House Minority leader Kevin McCarthy, R-Calif., not pictured, speaks at DMI Companies in Monongahela, Pa., Friday, Sept. 23, 2022. McCarthy joined with other House Republicans to unveil their "Commitment to America" agenda. Once shunned as a political pariah for her extremist rhetoric, the Georgia lawmaker who spent her first term in Congress stripped of institutional power by Democrats is being celebrated by Republicans and welcomed into the GOP fold. (AP Photo/Barry Reeger, File)

WASHINGTON (AP) — Marjorie Taylor Greene took her seat directly behind Republican House leader Kevin McCarthy, a proximity to power for the firebrand congresswoman that did not go unnoticed, as he unveiled the House GOP’s midterm election agenda in Pennsylvania.

Days later, she appeared on stage warming up the crowd for Donald Trump, when the former president rallied voters in Michigan to cast ballots for Republicans, including for control of Congress.

Once shunned as a political pariah for her extremist rhetoric, the Georgia congresswoman who spent her first term in the House stripped of institutional power by Democrats is being celebrated by Republicans and welcomed into the GOP fold. If Republicans win the House majority in the November election, Greene is poised to become an influential player shaping the GOP agenda, an agitator with clout.

“No. 1, we need to impeach Joe Biden. No. 2, We need to impeach Secretary Mayorkas. And No. 3, we should impeach Merrick Garland,” Greene told The Associated Press outside the U.S. Capitol. Alejandro Mayorkas is the secretary of the Department of Homeland Security and Garland the attorney general.

Scolding the media for having been “wrong about me” from the start, she said those who know better “take me very seriously.”

This is the outlook for the Republican Party in the Trump era, the normalizing of once fringe figures into the highest ranks of political power. It’s a sign of the GOP’s rightward drift that Greene’s association with extremists and nationalists, violent rhetoric and remarks about Jewish people have found a home in elected office. Her ascent brings into focus the challenge ahead for McCarthy, whose GOP ranks are filling with far-right political stars with the potential to play an oversized role in setting the policies, priorities and tone of the new Congress.

“I’ve said for a long time there’s a battle for the heart and soul of the Republican Party,” said Majority Leader Steny Hoyer, the No. 2 Democrat in the House, at a briefing ahead of the midterm elections.

When the congresswoman says outlandish things — as she did at the Trump rally earlier this month claiming “Democrats want Republicans dead, and they’ve already started the killings” — few Republican leaders dare a public or private rebuke of such incendiary language. In this case, she was exaggerating two local incidents involving politics, one that ended tragically in a fatality.

Greene’s political currency stretches beyond her massive social media following and her ability to rake in sizable sums from donors. Her proximity to Trump makes her a force that cannot be ignored by what’s left of her mainstream GOP colleagues.

McCarthy’s allowance for Greene to sit front and center with leadership for the campaign rollout was not by accident but design. The Republican lawmakers in attendance celebrated her presence, calling it a sign of the GOP’s “big tent” that welcomes all comers. But Greene’s arrival also signaled a stark normalizing of the most extreme elements in the Republican Party.

Longtime political strategist Rick Wilson, a former Republican who left the party in the Trump era, calls Greene’s brand of politics “government by trolling” that marks a dangerous new era for the GOP and will make it difficult to govern. McCarthy is in line to become House speaker if Republicans regain the majority.

“No matter what the trolling part of the Republican caucus does, you can’t ever satisfy them,” said Wilson, now at the Lincoln Project.

With the departure of the last vestiges of the anti-Trump wing of the House GOP — Liz Cheney defeated by a primary opponent and Adam Kinzinger deciding to step down rather than seek reelection — “that’s it,” Wilson said.

Greene swept onto the national stage in the 2020 election, catapulted forward even before she took office. As the lawmaker-elect from northwest Georgia, she attended a key organizing meeting at the Trump White House as lawmakers laid plans to object to the certification of Joe Biden’s election on Jan. 6, 2021. When she arrived to be sworn into Congress, she wore a “Trump Won” face mask.

Democrats moved swiftly and unequivocally to reprimand Greene, voting to strip her of congressional committee assignments over her incendiary rhetoric, including trafficking in volatile conspiracy theories. Greene drew rebuke from her own party a few months later for comparing mandatory COVID-19 face masks to the treatment of Jewish people by Nazi Germany.

While some have tried to compare Greene to outspoken far-left lawmakers, it became clear even to Republican leaders that Greene stood in a category of her own.

At that time, McCarthy called her comments about the Holocaust “wrong” and “appalling.” Greene later apologized.

In many ways, Greene’s arrival in the House traces the arc of the Republican Party’s rightward evolution from the Newt Gingrich revolution that brought conservatives to power in the 1994 election, to the “tea party” Republicans that regained the House majority in 2010.

Jack Kingston, a former Republican congressman who rose during those earlier eras, said McCarthy was smart in welcoming Greene to unfurl the House GOP’s “Commitment to America” last month.

“He’s got to work with her, and he knows that,” Kingston said.

“Getting Marjorie Taylor Greene on board is very important,” he said. “If you don’t bring everybody in the tent, they’re going to find their own niche.”

In the interview, Greene said she is certain she will be reinstated on her congressional committees if Republicans win the majority, eyeing the House Oversight panel, and is talking to leadership about other opportunities in the new Congress.

Not only does Greene want to impeach Biden and Cabinet officials, she is eager to conduct investigations, including into the origins of COVID-19.

Last month, Greene unveiled legislation that is another priority — her bill to prohibit some gender reassignment procedures on minors — flanked by a dozen Republican lawmakers and leaders in the conservative movement. Many of them praised the congresswoman for her work.

“I want to thank Marjorie Taylor Greene — who is soon to get her full legislative powers back, by the way,” said Matt Schlapp, chairman of the Conservative Political Action Committee, who hugged her afterward.

“If this is the type of thing that you’re going to have the courage to do, I think that’s something everybody needs to understand,” Schlapp said.

McCarthy and Greene appear to have come to an understanding that they need each other. The leader needs Greene to come into the GOP fold rather than throw rocks from outside. She needs McCarthy’s blessing to regain committee assignments, enabling her to participate more fully in Congress and put her imprint on legislation.

At the Pennsylvania event McCarthy batted away questions about his ability to govern if Republicans win the majority.

“Name me one person in the conference that is opposed to this,” he said afterward of their platform. “Is that a difference? Yes.”

Follow AP for full coverage of the midterms at https://apnews.com/hub/2022-midterm-elections