Pearl Harbor Survivor from Floresville dies at age of 98 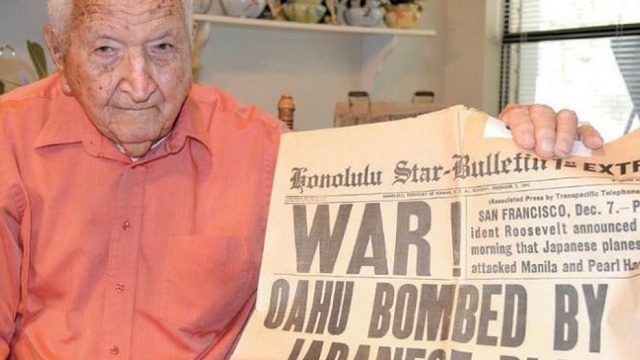 SAN ANTONIO (KTSA News) – Just days away from the 79th anniversary of the Japanese attack on Pearl Harbor, one of the survivors has passed away.  Abner James “A.J.” Dunn of Floresville died Nov. 23 at the age of 98 with his wife, Grace, by his side.

Dunn was born October 23, 1922 in Corpus Christi and joined the Navy in 1940.  He was assigned to the USS OGLALA, a mine layer that was anchored at Pearl Harbor.  December 7, 1941, Seaman First Class A.J. Dunn was returning from leave after doing Christmas shopping in Honolulu.  At 7:55 a.m. planes suddenly flashed overhead and bombs began to fall.

Dunn’s obituary says the 18-year-old and some of his buddies grabbed a taxi and headed for the base. When they got to the gate, they started running down the street toward their ship, dodging machine gun fire.  Dunn’s group was ordered to try to extinguish fires on a couple of ships, but they were forced to clear just before the ships exploded.

When he finally reached  his own ship, he found the OGLALA had sunk. When the attack ended, 18 ships were sunk or seriously damaged, 188 Army Air Corps and Navy planes were destroyed, and 2,403 men and women were killed.

Dunn served for 5 more years on 6 different ships. He later owned an appliance store and worked as a residential home builder. He had a passion for sailing his 35 ft Catalina named Sea Foam and enjoyed fishing and traveling in his RV.

A service is scheduled at 11:30 a.m.Tuesday at Seaside Memorial Park in Corpus Christi.