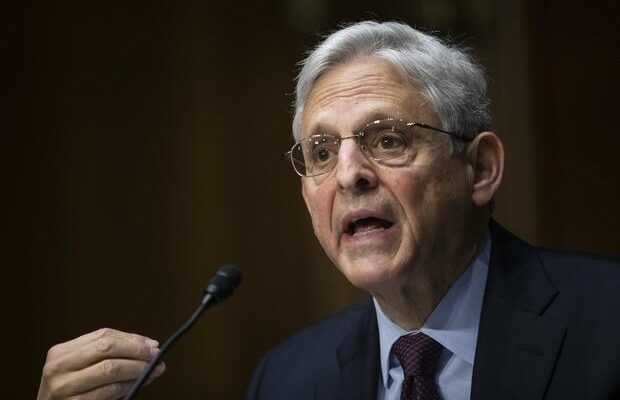 Washington — Attorney General Merrick Garland on Wednesday defended himself against claims from Senate Republicans that a memo he issued about violent threats to school board members could have a chilling effect on parents who are seeking to voice their concerns about their children’s education.

Garland’s one-page memo, issued October 4, has become a flashpoint in a broader battle waged by Republicans against the Biden administration and schools over mask mandates and the teaching of critical race theory, an academic concept developed by legal scholars to examine the ongoing effects of racism in American policies and institutions.

Opposition to the two issues by parents of school-aged children have led to protests and disruptions of school board meetings, and two officials with the National School Boards Association asked President Biden last month for federal assistance in responding to threats made against local school board members, school administrators, teachers and staff over COVID-19 mitigation measures and the public school curriculum in different states.

Senator Chuck Grassley of Iowa, the top Republican on the Judiciary Committee, told Garland he should rescind his memo because the school board association’s board of directors apologized for the language in the initial missive to Mr. Biden, which said violent and malicious acts against public school officials could “be the equivalent to a form of domestic terrorism and hate crimes.”

Calling the message “extremely divisive,” Grassley told the attorney general it could deter parents from speaking up during school board meetings out of fear of a possible response from federal law enforcement.

But Garland told Republicans during a Senate Judiciary Committee hearing that the memo focused on threats of violence against public servants and aimed to facilitate consultation between federal and local law enforcement.

“The memo is only about violence and threats of violence. It makes absolutely clear in the first paragraph that spirited debate about policy matters is protected under our Constitution. That includes debate by parents criticizing school boards. That is welcome. The Justice Department protects that kind of debate,” Garland told Grassley. “The only thing we’re concerned about, senator, is violence and threats of violence against school officials, school teachers, school staff, just like we’re concerned about those kinds of threats against senators, members of Congress, election officials.”

Senator Tom Cotton, a Republican from Arkansas, slammed Garland for what he said was an “outrageous directive siccing the feds on parents at school boards across America.”

Cotton pressed the attorney general about why the Justice Department’s National Security Division would have a role in dealing with parents who disagree with school boards. The division was cited in a press release about the October 4 memo as being included in a to-be-created task force focusing on how federal enforcement tools can be used to address criminal conduct toward school personnel.

“This is shameful. This testimony, your directive, your performance is shameful,” Cotton told Garland. “Thank God you are not on the Supreme Court. You should resign in disgrace.”

Garland, though, again reiterated his memo was focused on violence and violent threats levied against school officials, and was not aimed at parents vocalizing their areas of disagreement with school boards.

“The memorandum makes clear the parents are entitled and protected by the First Amendment to have vigorous debates. The Justice Department is not interested in that question at all,” he said.

Earlier in the hearing, Garland said there has been a “rising tide of violence” against a litany of public officials, ranging from school administrators to judges to members of Congress.

“All of us have seen these reports of violence and threats of violence. That is what the Justice Department is concerned about,” he said.

Senator Dick Durbin of Illinois, a Democrat who chairs the Senate Judiciary Committee, cited numerous incidents of violence against school board members and teachers. In one instance, a parent in Texas ripped a mask off a teacher’s face, according to Fox 7 Austin, while a California parent allegedly struck a teacher over mask requirements, according to KCRA.

“These are not routine people incensed or angry. These are people who are acting out their feelings in a violent manner, over and over again,” Durbin said.

In his memo, Garland directed the FBI and U.S. attorneys to convene meetings with federal, state and local leaders to discuss strategies for addressing threats against school officials, board members, teachers and staff and “open dedicated lines of communication for threat reporting, assessment and response.”

“While spirited debate about policy matters is protected under our Constitution, that protection does not extend to threats of violence or efforts to intimidate individuals based on their views,” the attorney general wrote. “Threats against public servants are not only illegal, they run counter to our nation’s core values. Those who dedicate their time and energy to ensuring that our children receive a proper education in a safe environment deserve to be able to do their work without fear for their safety.”