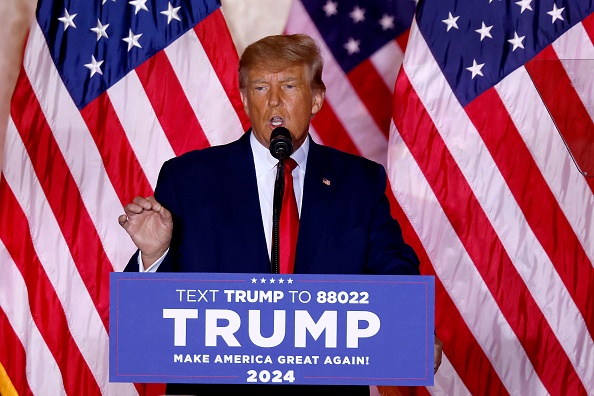 Former US President Donald Trump speaks at the Mar-a-Lago Club in Palm Beach, Florida, on November 15, 2022. - Donald Trump pulled the trigger on a third White House run on November 15, setting the stage for a bruising Republican nomination battle after a poor midterm election showing by his hand-picked candidates weakened his grip on the party. Trump filed his official candidacy papers with the US election authority moments before he was due to publicly announce his candidacy. (Photo by ALON SKUY / AFP) (Photo by ALON SKUY/AFP via Getty Images)

Attorney General Merrick Garland has named a special counsel to oversee the entirety of the Justice Department’s criminal investigation into the retention of national defense information at former President Donald Trump’s residence at Mar-a-Lago and key aspects of the Jan. 6 investigation.

“I’m here today to announce the appointment of the special counsel in connection with two ongoing criminal investigations that have received significant public attention,” Garland said.

Garland announced at a news conference Friday that John “Jack” Smith will be the special counsel tasked with investigating and deciding whether charges should be brought. He called Smith an “impartial and determined prosecutor.” Smith is currently the chief prosecutor for the special counsel in the Hague.

As special counsel, Smith will begin immediately to oversee two ongoing criminal investigations. The first is whether anyone or any entity “unlawfully interfered with the transfer of power following the 2020 presidential election or the certification of the Electoral College vote held on or about January 6, 2021,” Garland said.  And the second is the probe into “classified documents and other presidential records, as well as the possible obstruction of that investigation.”

The attorney general told reporters, “Based on recent developments, including the former president’s announcement that he is a candidate for president in the next election, and the sitting president’s stated intention to be a candidate as well, I have concluded that it is in the public interest to appoint a special counsel.”

The news comes days after Trump announced he’s running for president a third time. Former presidents are not automatically protected from federal prosecution.

This is a developing story.