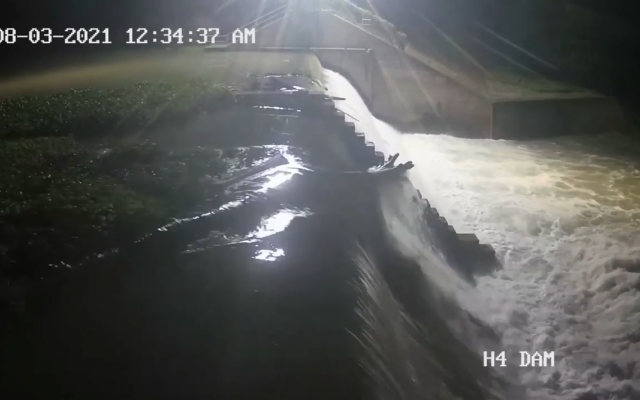 Screencap of security footage at Lake Gonzales on Aug. 3

SAN ANTONIO (KTSA News) — The Guadalupe-Blanco River Authority about Lake Gonzalez to the organization’s board of trustees yesterday after more than two weeks since the lake’s dam experienced a failure.

In last night’s board meeting, GBRA Executive Manager of Engineering Charles Hickman said a large tree flowing downstream interrupted normal operations on a spill gate on August 3 that ultimately led to the gate fully breaking, which has effectively drained the lake.

Because the dam is nearly 100 years old, Hickman said the only repairs options recommended by inspectors to make the gate minimally operational are too dangerous for dam operators.

“We’ve already seen one of these gates [at Lake Dunlap] fail without warning on sunny day conditions when they were not in operation, and at that time we made the policy decision that for safety reasons we would not be sending operators out on the gate,” Hickman said. “We can’t come up with a way to try to perform these repairs that doesn’t require that at some point.”

Hickman said the spill gate failure at Lake Gonzales is not considered catastrophic like the collapse of the system at Lake Dunlap in May, but the GBRA is being cautious.

“… At that point you’re into a full-scale replacement of the gate, that’s where we keep landing,” Hickman said. “With all of those factors considered, our recommendation is to continue to pursue a funding mechanism that allows us to truly replace the gate at Gonzales and not take the safety risk and attempt these temporary repairs.

A GBRA representative told the board of trustees addressed questions related to funding, stating there are no “funding mechanisms” for Lake Gonzales or Lake Wood: the populations are too small to create taxing districts and the official said there are no state or federal relief funding currently available.

There was hope that federal relief could be available with the passage of the Bipartisan Infrastructure Investment and Jobs Act by federal legislators on August 10, but according to the language in the bill, grants for dam repairs on Lake Gonzalez would be granted if the lake is used as a means for surface transport of goods.

The Lake Gonzales briefing ended without any suggestion of fixes to the current situation outside of exploring funding options.

Residents around Lake Gonzales, including one plucky Youtuber named Five, are chronicling the drain of the lake and the subsequent consequences including the death of the lake wildlife.

GBRA Environmental Science staff, Canyon Lake Gorge staff, Texas Parks & Wildlife and US Fish & Wildlife worked together on Aug. 6 in an effort to save local wildlife including more than 2,000 freshwater mussels.

Courts have sided with the GBRA against property owners in legal battles related to other dam failures over the last two years.