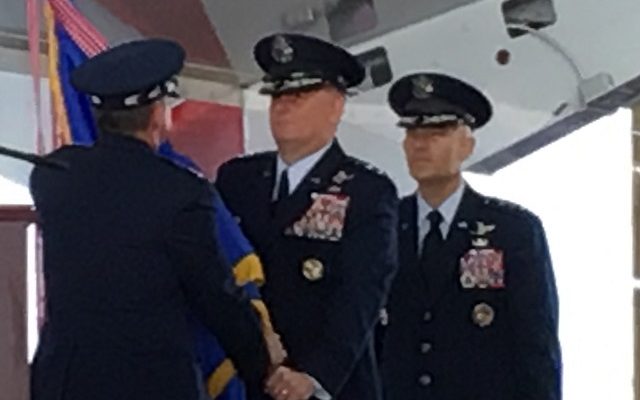 Friday, Lt.  Gen. Steven Kwast relinquished command of the Air Education and Training Command to Webb  in a ceremony at Joint Base San Antonio-Randolph.  Air Force Chief of Staff Gen. David Goldfein presided over the formal change of command, and in his address, he referred to Webb as “the point man at the  White House for the takedown of Osama Bin Laden.”

Webb is a 1984 graduate of the Air Force Academy and a native of Austin, Texas.  He’s a command pilot with more than 3,700 flying hours, including 117 combat hours in Afghanistan, Iraq and Bosnia.

After accepting the guidon from Goldfein Friday, Webb addressed the troops for the first time as their commander.  He expressed his appreciation for his new role and says AETC will continue to advance the fight with innovative, lethal Airmen who are life-long learners.

He told the Airmen and special guests that achieving victory in the battlefield takes hard work, training, good equipment and unique people “endowed with such a sense of pride and patriotism for this great nation and what it stands for that they are willing to sacrifice, if need be,  for its ideals–ideals of course, set forth in our Constitution.”

As Commander of AETC, Webb will  be responsible for the recruitment, training and education of Air Force personnel.  The command operates more than 1,400 trainer, fighter and mobility aircraft, 23 wings, 10 bases and five geographically separated groups.  It trains more than 293,000 students per year.