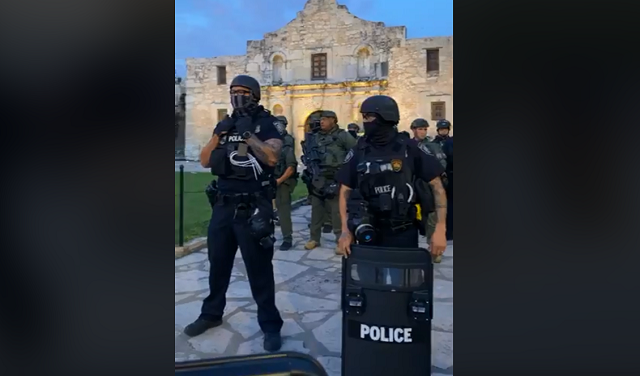 Police at the Alamo during the George Floyd Protests in San Antonio May 30,2020/KTSA Photo-Elizabeth Ruiz

Bush said his office is closely monitoring social media posts and rumors about protesters threatening to go to the Alamo.

He warned that the Alamo is the Shrine of Texas Liberty and “it will be defended.”   The Texas General Land Office is responsible for the care of the Alamo.

“Rest assured we have already deployed, for several weeks and will continue to do so, the Alamo Rangers in partnership with the SAPD, The Department of Public Safety, and the National Guard to protect this sacred site,” said Bush.

Late last month, the Alamo Cenotaph, which honors those who died defending the Shrine of Texas Liberty, was spray painted with downward arrows and the words “White Supremacy,” “Profit over People,” and “the Alamo.”

A group of armed Texans led by This is Texas Freedom Force guarded the Cenotaph overnight to prevent further damage.  They also stood guard in front of the Alamo when protesters gathered at Alamo Plaza May 30.

The Alamo and the grounds remain closed indefinitely.  Alamo Plaza is open during the day to visitors who want to take photos of the facade of the Alamo Chapel, but the doors to the Shrine of Texas Liberty remain closed.

“The well-being of both our visitors and staff are of utmost importance to us and we will reopen to the public once we are able to implement recommended COVID-19 precautions,” said a media post. “We will update our social media pages with information about visiting when the time comes.”

Don’t mess with the Alamo. pic.twitter.com/oqDM8wUOrT

“President Trump is the only thing standing between America and socialism,” the Texas Land Commissioner  told The Dallas Morning News .  He said that he plans to vote for Trump in November.