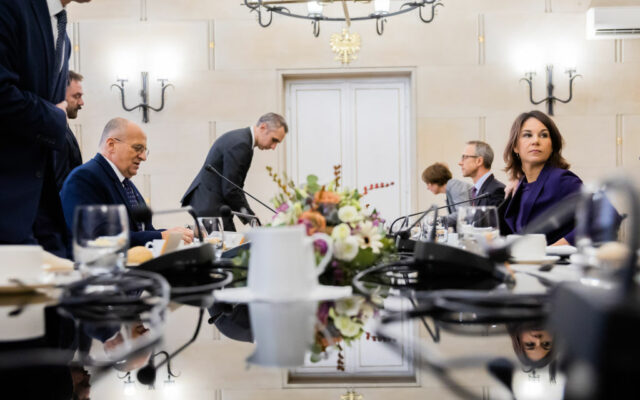 “The question of reparations is, as you know, concluded from the German government’s point of view,” she said.

On Monday, Rau signed and expedited a note to Germany demanding some $1.3 trillion in reparations for material and other damages and losses Poland claims were caused by Nazi Germany’s wartime occupation from 1939-45.

At the news conference, Baerbock firmly restated Berlin’s stance that, while Germany recognizes its historical responsibility, the matter is closed.

Rau said he believes that position may change in the course of negotiations in which he hopes Germany will engage.

Baerbock stressed that today the two neighbors share the responsibility for keeping Europe united in the face of outside threats, like Russia’s war in Ukraine. She also stressed the importance of the 1990 and 1991 bilateral treaties that confirmed Poland’s postwar border with Germany and good neighborly cooperation.

Border security is of tantamount significance to the Poles, due to centuries of turbulent history.

In the years after the war, Germany paid compensation to Eastern Bloc nations, but — by Moscow’s decision — only a small portion of it went to Poland, which was the war’s first and hardest-hit victim.

Also Tuesday, Polish lawmaker Arkadiusz Mularczyk, who spearheaded the efforts to reevaluate the amount of damages Germany owed, said a similar assessment should be made of wartime damages caused by the Soviet Red Army, which also invaded Poland in 1939 and later battled the Germans on Polish territory to drive them out.

Around 6 million of Poland’s citizens, including 3 million Jews, were killed in the war. Some of them were victims of the Soviet Red Army that invaded from the east.