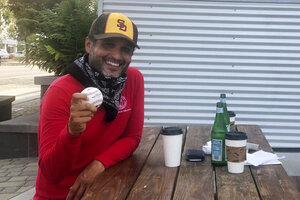 OAKLAND, Calif. (AP) — It began when lifelong baseball fan Kimberlee MacVicar intimated that in her 52 years, she had never corralled a foul ball.

“I’ve waited half a century, so I’m not in a rush,” she texted me on July 24 — opening night in Oakland.

With nobody else to scavenge for baseballs during this strange COVID-19 season devoid of fans, I had a clear advantage as a regular covering Bay Area baseball and one of the few people allowed inside the stadium. So I saw to it that the next day, MacVicar received a ball hit foul by slugger Mark Canha as her Athletics defeated the Angels.

This sparked an idea: Why not share the souvenirs, spreading some joy to those who can’t go to the ballpark?

A’s management signed off on the project. The Coliseum grounds crew took to tipping me off as to where to find the prizes.

Across San Francisco Bay, the Giants’ clubhouse staff was encouraging. The public relations department provided permission to retrieve a ball or two mid-game at Oracle Park.

There were days baseballs would mysteriously turn up at my Oakland workstation. Other times, they were delivered during a game.

I’d regularly holler for an assist: “Where’d it land?” With no fans to stop them, balls roll fast and far.

Once retrieved, they went into my trunk for gifting — more than 100 so far. Some went to people I knew well, others to strangers, like the road maintenance workers and construction crews offered the usual choice: “clean, or dirty and scuffed?”

The farthest any ball traveled was some 5,500 miles, to longtime Giants fan Manner Pohl in tiny Schwentinental, Germany — a request from daughter Astrid Keene for his 85th birthday in August.

“He is so excited, giving him something to live for since he is almost blind,” Keene said. “It was wonderful to hear him being so happy.”

There was a man named Casey, who secured a ball I dropped carefully from Oracle Park’s outfield walkway to the path along McCovey Cove. When I saw him later, Casey was beaming. “I’m working on all the grips,” he said, proudly demonstrating one.

And to Cormac Daly, an Irish lad of 9 who roots for the Giants and played in Little League for the A’s.

And to cooks like Carlos Cruz at Little House Cafe who makes a mouth-watering breakfast burrito. And bakers like Beth Woulfe and her staff at Crispian Bakery.

And to Padres fan Bob Gans, who stopped to talk about bay swimming on a visit from La Jolla and walked away with a souvenir.

Cathie Caris, a fan of both the A’s and Giants, was thrilled when a ball turned up on her porch. Her thank you note is lovely and handwritten.

“You certainly cheered me up once again with your thoughtful and sweet and cool gift from the ballpark (that I miss so much),” said the proud owner of classic Converse sneakers — in both Giants orange and A’s green, of course.

While nonstop news about the effects of the coronavirus has become commonplace, so, too, have tales of kindness. “One Good Thing” is a series of AP stories focusing on glimmers of joy and benevolence in a dark time. Read the series here: https://apnews.com/OneGoodThing