Go Enjoy The Weekend And Let Go Of the Mitt-rage 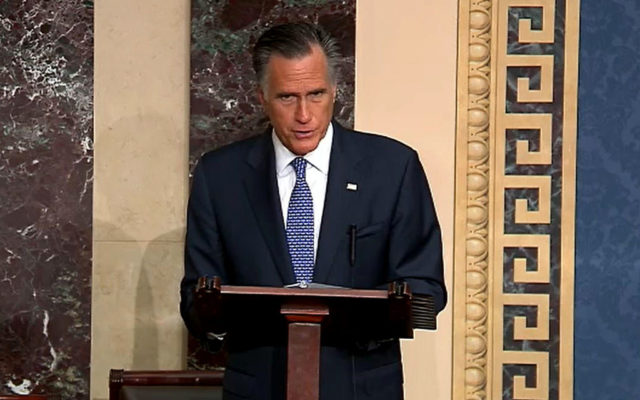 WASHINGTON, DC - FEBRUARY 5: In this screengrab taken from a Senate Television webcast, Sen. Mitt Romney (R-UT) talks about how his faith guided his deliberations on the articles of impeachment during impeachment proceedings against U.S. President Donald Trump in the Senate at the U.S. Capitol on February 5, 2020 in Washington, DC. Senators will cast their final vote to convict or acquit later today. (Photo by Senate Television via Getty Images)

I’d say we might be spending too much time on this guy, but we probably already have.

History will record many things about the impeachment trial of President Donald Trump. One of them will be Senator Mitt Romney (R-UT) voting to convict on one of two counts brought by the House.

The one most people will remember is that the Senate vote acquitted Trump.

Here’s why it’s time to let go of your Mitt-rage.

Romney says he “agonized” over his decision. Spoke of “sleepless nights”. Takes his oath before God seriously. Was thinking of the grandchildren, and of integrity.

And you know what?

That may all be true, or not. Only the senator knows. We can wonder, but only he knows how sincere he is. I might doubt it. You might believe it. We’d be guessing.

I have nothing with which to test his sincerity. But sincerity isn’t everything.

My dad once told me the story of a football player for the University of California who picked up a fumble and ran 69 yards the wrong way, scoring a touchdown for the opposing team, Georgia Tech, in the 1929 Rose Bowl.

It was the ultimate humiliation, although he was spared the indignities of Twitter and YouTube, seeing as though it was 1929.

In my dad’s time, that story represented an example of overcoming embarassment. Although the Tech team won, that young man grew up in grace and success, and spent the rest of his life writing encouraging letters to people in the news who had setbacks or trials.

Here’s another way to look at the wrong-way football player. He was sincere. He ran hard, and long, to that end zone.

We can all be like that, sometime. Sincere, but sincerely wrong.

I believe Mitt Romney could be sincere, but sincerely wrong.

The impeachment was part of a attempted coup, a long, insidious process to erase the 2016 election result. The senator either did not read, or ignored, the multiple, credible stories about how the CIA analyst and “whistleblower” was talking with other Obama-holdover White House staffers about how to remove the newly-elected Trump, just weeks after the Inauguration.

Years before the Ukraine phone call.

We also know that Cong. Adam Schiff and his staff coordinated with the analyst well before the whistleblower complaint. It wasn’t “brought to the attention” of Schiff. He was in on it.

If you want to be angry, these are facts that should outrage any American.

As for Mitt Romney, what has he really gained?

He will pay a political price. Only he knows if it was worth it.