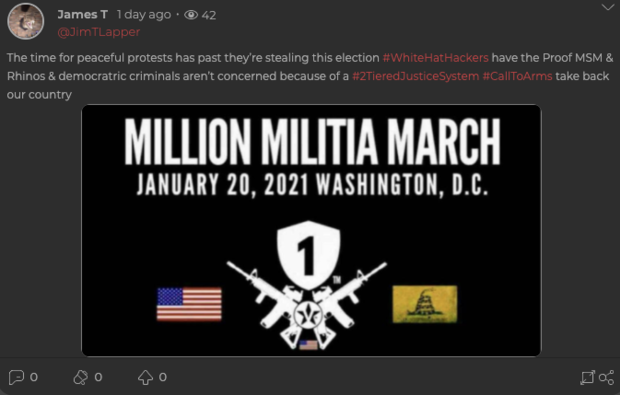 A post on Parler advertising a "million militia march."
Parler, a social media site that prides itself on allowing unrestricted freedom of speech, has been suspended from Google Play for failing to moderate content that incites violence, Google said on Friday. The suspension comes as multiple social media companies are cracking down on posts that promote violence in the wake of the assault on the U.S. Capitol.

A Google spokesperson said the suspension was made “in order to protect user safety.”

“Our longstanding policies require that apps displaying user-generated content have moderation policies and enforcement that removes egregious content like posts that incite violence,” a company spokesperson said. “All developers agree to these terms and we have reminded Parler of this clear policy in recent months.”

The company said it’s aware of “continued posting” in the app that “seeks to incite ongoing violence in the U.S,” adding that “In light of this ongoing and urgent public safety threat, we are suspending the app’s listings from the Play Store until it addresses these issues.”

There have been dozens of posts on the app that encourage users to partake in actions similar to those of Trump supporters rioting at the Capitol on Wednesday.

One post that was published on Thursday includes a banner for a “million militia march” to be held on January 20, the day President-elect Joe Biden will be inaugurated.

“The time for peaceful protests has past they’re stealing this election,” the post reads. “…#CallToArms take back our country.”

The Google spokesperson said that the company recognizes content policies are debatable and that immediately removing content that violates the policy can be “difficult,” but that moderating “egregious content” is required by apps nonetheless.

The suspension comes hours after many pointed out how calls for violence on the app have intensified since Wednesday.

One post, highlighted by New York Representative Alexandria Ocasio-Cortez, calls the rioters “patriots” who were “carrying banners of support for the greatest President the world has ever known” and said they will return to the area on January 19, weapons in tow.

“What are @Apple and @GooglePlay doing about this?” Ocasio-Cortez tweeted.

California Representative Ro Khanna called on Amazon to follow in Google Play’s footsteps, as the app is hosted by Amazon Web Services.”Amazon should deny Parler services until Jan 21 unless they commit to removing all posts related to incitement of violence concerning inauguration,” Khanna tweeted. “This will help prevent further violence and save lives.”

Twitter’s announcement sparked fury on Parler, leading some users to call for war. “The United States of America has been taken over by the Communist Party today. You no longer have freedom of speech. They’re coming for your guns next,” one post says. “Civil War is coming.”

“This might seem like a harsh call, but WAR is upon us. We didn’t want this, but when the enemy shuts down every form of communication for patriots to get our story out to the public unfiltered there really is no other option. This is our time for #civilwar2,” another post reads.

Parler CEO John Matze posted on his Parler account Friday afternoon that “we will not cave to pressure from anti-competitive actors.”

“We will and always have enforced our rules against violence and illegal activity. But we WONT cave to politically motivated companies and those authoritarians who hate free speech,” he said.

“We want to be clear that Parler is in fact responsible for all the user generated content present on your service and for ensuring that this content meets App Store requirements for the safety and protection of our users. We won’t distribute apps that present dangerous and harmful content,” Apple said, according to the screenshot.

Matze mocked the message, saying “apparently they know what is best for you by telling you which apps you may and may not use.”