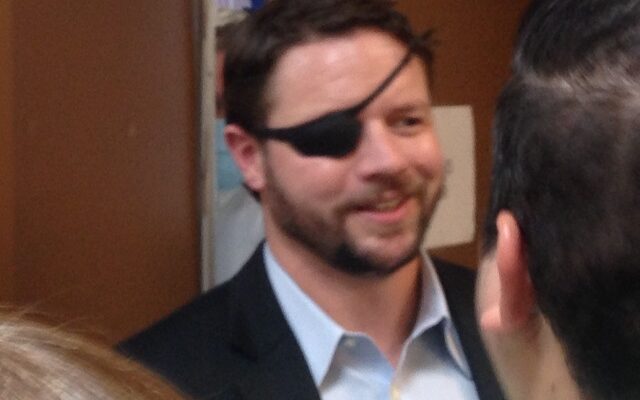 SAN ANTONIO (KTSA News) – Houston-area Congressman Dan Crenshaw led a get-out-the-vote rally in Helotes Wednesday afternoon for one of the GOP congressional candidates featured in his Avengers-style ad.   Tony Gonzales is in a tight race against Democrat Gina Ortiz Jones for the 23rd congressional seat.

Crenshaw, a former Navy Seal who lost his right eye in an explosion in Afghanistan, told the crowd at the VFW Post in Helotes there’s a lot at stake in this election.

“You’re probably wondering how on earth a party of socialists can be so close to winning an election.  It’s mind-blowing,” said Crenshaw.

The freshman U.S. Representative says many people agree with President Trump on the issues, but they may not vote for him because they don’t like his personality or demeanor , “and they’re about to vote themselves into oblivion.”

To make a point about how every vote counts, he noted that Gonzales beat his opponent in the Republican Primary by 42 votes, so he’s calling Gonzales’s race for the 23rd congressional district seat “Mission 42.”   He urged everyone at the rally to contact 42 people every day and tell them to vote for Gonzales.

“We are the ones that stand for this basic truth–that America is good and that we will teach our kids to love this country, not hate it,” said Crenshaw.  “Thank you for standing for the flag and thank you for supporting my good friends here, Tony Gonzales and Chip Roy.”

Surrounded by supporters at the VFW Post, Crenshaw posed for selfies, signed autographs and chatted with them.

Gonzales, a former Navy Cryptologist, thanked Crenshaw for supporting him early on in the campaign.  In addition to thanking military veterans at the rally, he expressed his appreciation for their families.  As the father of six children, Gonzales told the crowd he knows how difficult it is for the families of military personnel to have to move every few years.

Meanwhile, Mayor Ron Nirenberg has announced his endorsement of  Jones.

“Gina Ortiz Jones experienced first-hand what it’s like to have a community that invests in working people,” Nirenberg said.  “It’s what allowed her to grow up healthy, get an education, and serve our country honorably in the Air Force and in Iraq. I’m proud to endorse Gina, because she is rooted in our community, and she will be a champion that our city and working families deserve in Congress.”

Jones responded on social media that she’s grateful to have Nirenberg’s support.

“In Congress, I look forward to working with our local leaders to ensure that all hardworking Texans have access to good-paying jobs, quality, affordable health care, and a first-class education,” said Jones.