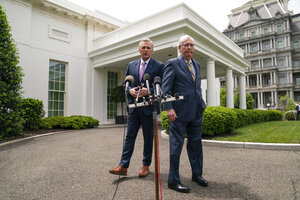 House Minority Leader Kevin McCarthy of Calif., left, and Senate Minority Leader Mitch McConnell of Ky., arrive to speak to reporters outside the White House after a meeting with President Joe Biden, Wednesday, May 12, 2021, in Washington. (AP Photo/Evan Vucci)

WASHINGTON (AP) — President Joe Biden met Wednesday with the four congressional leaders at the White House for the first time and said he wants to reach a compromise on an infrastructure plan, but expectations for a quick deal remain slim despite his history of working with Republicans.

This first formal Oval Office meeting for the group — and for Biden and Senate Republican leader Mitch McConnell of Kentucky — brought together those two deal-makers at a dramatically different political and economic time than in their past talks as Biden pushes his $4 trillion jobs and families proposals.

“When I ran, I said I wasn’t going to be a Democratic president, I was going to be president for all Americans,” Biden said at the start of the nearly two-hour session.

Referring to the gap between his ambitious proposals and what Republicans say they are willing to consider, the president said: “We are going to see if we can reach some consensus on a compromise.”

Asked by a reporter how he expected to do that, Biden quipped: “Easy, just snap my fingers, it’ll happen.”

Afterward, Republican leaders characterized the meeting as productive, but insisted they were only eyeing a much smaller package. They told Biden they will refuse to reverse the 2017 corporate tax cuts to pay for it.

“That’s our red line,” McConnell said outside the White House. “There is certainly a bipartisan desire to get an outcome.”

While it was the first such meeting of Biden’s presidency, the setting drew a familiar White House scene of the powerful party leaders, who can make or break an administration’s legislative agenda, formally arrayed around the president. The mood can be seen as friendly or tense. The last such encounter ended with Pelosi standing to confront then-President Donald Trump.

Biden, who was a longtime Delaware senator, and McConnell have traded expressions of friendship, but their ability to find political common ground seems limited. In a capital where Democrats hold control by the slimmest of margins, it’s unclear whether they actually need each other to accomplish their political goals.

Infrastructure wasn’t the only issue raised in the meeting.

McCarthy said he impressed on the president the need for changing environmental reviews so projects can be developed quickly. “There’s an opportunity we can work together,” McCarthy said.

Republicans have balked at the size of Biden’s infrastructure plan, which moves beyond roads and bridges to dramatically expand child care options and other return-to-work priorities, and his idea to pay for it with tax increases on the wealthy and corporations.

McConnell has indicated a much smaller package of no more than $800 billion, funded by gas taxes and other fees on users, is within reach for Republicans.

In recent days, Biden has opened the door to compromise, saying he was willing to negotiate the size of the overall investment and the tax increases to pay for it. He has suggested lifting the corporate tax rate from 21% to 28%. But Republicans view the 2017 tax law, which had lowered the rate from 35%, as their signature domestic accomplishment when they held power.

Just days before the meeting, McConnell said “100% of my focus is stopping” the Biden administration, a comment that evoked his pledge early in Barack Obama’s presidency to make the Democrat a one-term president. Obama served two terms.

Biden has long showcased his relationships with Republicans and made his ability to work with the GOP central to his governing philosophy. But a growing number of Democrats believe it is wasted energy, given their view of the GOP as too often obstructionist.

Schumer said Wednesday any deal “must be big and bold to meet the changes in the world.”

Biden’s most notable dealmaking success with McConnell came in the Obama-era budget showdowns during the rise of the tea party. As vice president, Biden was a trusted emissary to Capitol Hill for Obama, who had a chilly relationship with McConnell.

But times have changed, and nearly a decade later it’s an even more polarized environment.

White House aides were not surprised by McConnell’s declaration of defiance this week but believe that some common ground is possible. Public polling suggests that the infrastructure plan, much like the $1.9 trillion COVID-19 relief law enacted in March, is popular with voters. But the COVID-19 bill did not receive a single GOP vote.

Steve Ricchetti, a senior White House adviser, said Wednesday’s meeting is meant to “focus this conversation to where the priorities are and the space to find common ground.” From there, he said, it will become clearer in coming weeks “when there will be a real accelerated and pretty comprehensive dialogue on all of the elements.”

Biden and McConnell have so far had a relationship of necessity. What’s unclear now is whether the president will need the senator’s GOP votes or can muscle passage in the evenly split Senate where Democrats hold the majority because Harris can cast a tiebreaking vote.

Aides said Biden planned to stress that democracy itself is on trial and that the nation must prove it can take care of its own as it copes with the health and economic challenges from the pandemic.

The president has hosted a trio of key Democratic senators at the White House already this week, including moderate Democrats Joe Manchin of West Virginia and Kyrsten Sinema of Arizona; the White House needs to keep on board for the massive spending.

On Thursday, Biden was scheduled to meet with six Republican senators, including Sen. Shelley Moore Capito of West Virginia, the top Republican on the Senate Environment and Public Works Committee, to hear their plans for a smaller and more narrowly defined infrastructure bill.

Aides said to expect Biden to host more Republicans in the weeks ahead of a soft Memorial Day deadline the White House set for gauging how feasible a bipartisan bill may be. Missing no opportunity, Biden buttonholed Louisiana senators John Kennedy and Bill Cassidy on an airport tarmac during a visit to their home state last week.

“I made the point — not exactly in these words — that everybody is for infrastructure, nobody is happy with crappy,” Kennedy recalled of the conversation. “There’s a way to do this deal — if the president will limit it to infrastructure and then let’s have a frank discussion about how to pay for it.”