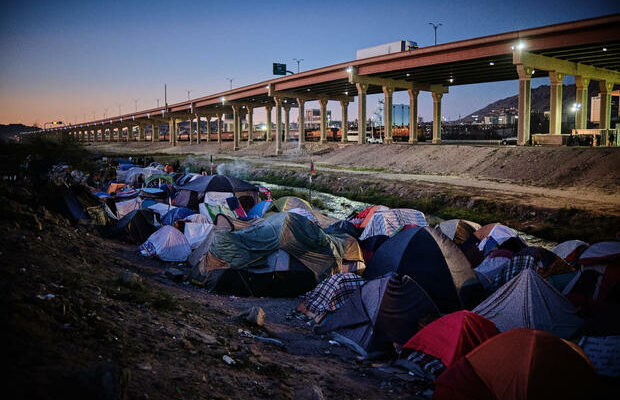 First authorized by the Centers for Disease Control and Prevention (CDC) in March of 2020 during the Trump administration, Title 42 has allowed the U.S. to expel migrants over 2.4 million times to Mexico or their home countries, without allowing them to request asylum, government data show.

Earlier this month, Sullivan declared Title 42 unlawful, finding that the federal government had not properly enacted or explained the border expulsions. Sullivan gave the Biden administration five weeks — until Dec. 21 — to stop expelling migrants under Title 42. He said he was doing so reluctantly, so officials could prepare for the policy shift.

In its emergency filing on Monday, the coalition of states said Biden administration officials had “abandoned their defense” of Title 42 by asking only for a five-week suspension of Sullivan’s ruling and not appealing it.

“Because invalidation of the Title 42 Orders will directly harm the States, they now seek to intervene to offer a defense of the Title 42 policy so that its validity can be resolved on the merits, rather than through strategic surrender,” the states wrote.

The states said the expiration of Title 42 will lead even greater numbers of migrants to cross the U.S.-Mexico border illegally. A sharp increase in migration, the Republican attorneys general argued, would harm their states financially, citing the costs of social services for migrants.

The states’ motion was opposed by the Biden administration and the American Civil Liberties Union, which filed the lawsuit challenging the Title 42 expulsions.

Lee Gelernt, an ACLU lawyer in the case, said the states’ request was inconsistent with their opposition to other pandemic-related restrictions, such as vaccine and mask mandates.

“The states are obviously and mistakenly trying to use Title 42 to restrict asylum and not for the law’s public health purposes,” Gelernt said. “Suddenly these states believe there is a need for COVID restrictions when it comes to migrants fleeing danger.”

While it defended Title 42 over a year as a key public health measure, the Biden administration in April announced it would gradually end the expulsions, saying they were no longer necessary to curb the spread of COVID-19 along the U.S.-Mexico border.

But a coalition of Republican-led states, including many of the ones that joined Monday’s motion, convinced a federal judge in Louisiana to halt Title 42’s termination on procedural grounds. That order was superseded by Sullivan’s ruling earlier this month.

While Department of Homeland Security (DHS) officials have said they’re preparing for the end of Title 42, and a potential subsequent increase in illegal border crossings, its termination will eliminate the main policy the Biden administration has relied on to manage a record number of migrant apprehensions.

In fiscal year 2022, federal officials along the southern border stopped migrants nearly 2.4 million times, an all-time high. Over 1 million of those border encounters led to the expulsion of migrants under Title 42, Customs and Border Protection (CBP) statistics show.

Last month, the U.S. expanded Title 42, expelling thousands of Venezuelans migrants to Mexico as part of an effort to deter an unprecedented wave of Venezulean migration to the southern border.